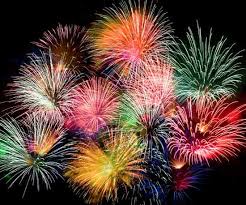 I thought that we were gonna be crackerless this year and whilst I didn't quite go into a 2 year old tantrum strop, it was close. We were all settled for a foodie boozey night in the city apartment across from the Story Bridge, with the ultimate explosion of crackers at midnight. They had a little taster at 8.30pm for the kids and there was not a cracker to be seen. I was less than fucking happy.

But we struggled on with cooking and eating. Steve had had a sneaky little peak at a barge which might have been being placed with some crackers, but he didn't let on in case I was even further disappointed.

Midnight loomed and we straggled out onto the balcony and prepared to be underwhelmed. But then the crackers started on the barge, and even though I was well aware that they were the consolation prize I sat in childlike awe, cos I really do love a cracker. The colours and the sound and the almost smell... It made my evening.

But a word to the Brisbane City Council: Pretending that there is anything flash about that bloody shitful light show, and I am using the term very loosely indeed, is just delusional. It's as plain as the nose on anyone's face that you are just doing some sort of cost cutting. Surely all those residents who live riverside and pay all that appalling rates money deserve a little more of the crackers, and their free loading friends do too.

Can't believe that the year is not even a day old and I have already had a whinge... seriously hope this is not a mirror for 2014 cos I plan for it to be a biggie... YIPPEE!

Here's cheers to a successful indulgent smiling year.
Posted by Unknown at 15:50