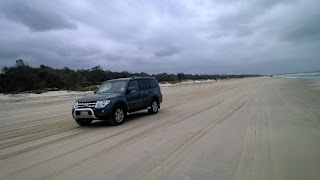 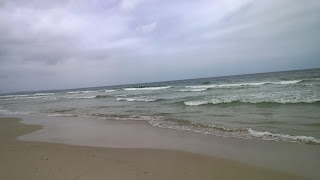 We went OFF ROAD yesterday. Yep we took the monster where it was designed to go and it was bloody marvellous.

We found the beach road at Bribie Island and let some air out of the tyres like professionals and leapt into the unknown. There is a very long lead in to the beach at Bribie and this is maybe the funest part of the ride. We were rocked all around the place and Steve cursed and concentrated on speed and direction and tried not to become airborne more than a couple of times. Bumpy would be an understatement.

The beach opened up like a movie set and it was really beautiful, even on a grey old day. We had done a bit  of a reccie about the tides and so were aware that time was a bit limited so Steve put his foot down and we were off. What a wonderful way to spend time.

It felt just a little naughty cos we weren't driving on the road and there were no line markings or signals or lights or instructions or directions. Just us and the beach and the other folk who were similarly inclined.

As we zipped past camped groups I was led to wondering if I might actually be able to manage to CAMP. The folk looked calm and comfortable and the view was just so serene. We talked about camping gear and what we would need, and we discussed getting a mattress custom made for the Monster.  I managed to par down requirements to an esky and a tarp held up by a couple of sticks. I do believe it was at this point that reality slapped me in the face and I realised that what would be fab would be to drive out all day, swim and eat and enjoy and then go back and stay somewhere with a bath.

I believe in the romantic idea of camping but the absolute knowledge of sand and salt and storms and other people, and the tree over there being the loo, well all that is a reality that is just not for me.
Posted by Unknown at 07:32