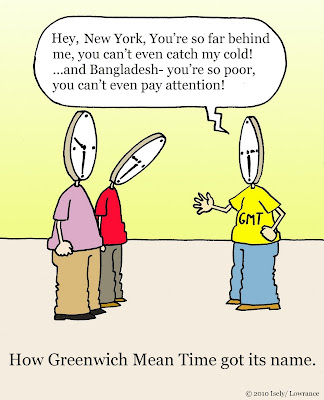 How does time get to be sooo elastic. It is of course not the least bit changeable except that we all know that a week at work is longer than a week on hols and the night before Christmas is the longest few hours of children's lives.

I was OK working out where he was when I was working on UK time but once that was lost and he landed on UAE time I didn't have a clue. Truth be told I don't get time zones at all. I can understand that when it's daytime here, it's nighttime in the UK cos of where the sun is in relation to where we are, and I can see that there must be middle bits too, but the maths of it all - well really who came up with it all. And it can't be set in stone anyway, if mere politician mortals can choose to change the time for summer or winter or indeed not change it for summer.

Time certainly is elastic and at the moment it is being stretched to about the limit. At least I get to sleep for a good bit of Steve's 14 hours. He got on the plane at 10.25am UAE time - about 4.30pm here and he lands at 6am ish. No wonder jet lag is such a bitch!! He's flying nearly all night during the day time or maybe I made that bit up.

I feel a little nauseous just trying to work it all out, let alone living through it.
Posted by Unknown at 16:44