Who'd be a dentist? 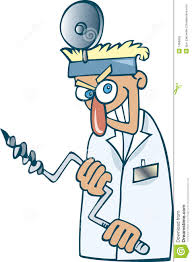 Seriously, what must go through the minds of people who willingly CHOOSE to study forever so that they too can dig up to their elbows in other people's mouths?

I suppose they can forever charge an arm and a leg for their services and apart from Parkinsons disease or too many vinos they should be able to practice into their dotage. And they can set their own hours, and go on holidays anytime that suits 'em and if they run late no one cares cos really who WANTS to run on in and jump into that bloody chair anyway.

Steve finished off part 2 of .....drum roll please.....ROOT CANAL treatment today. Last Thursday was visit number one and today he was finished. In times past when I was doing the whole lets get toothy rooted, the ordinary dentist did the lot. He rooted around in the root canal and scraped and prodded until that fucker was empty, or the patient died which ever came first, and then packed it full of something or other and then set about building a new tooth. But now there is a specialist dentist who only does the rooting. That's it! All day every day he roots around in canals and then sends people on their not so merry way.

Last week Steve was a little surprised and then shocked and then cross and then right royally shitty cos it BLOODY HURT! Me, well I was not surprised. Been there and done that and spit blood all over the T shirt. He has been popping Panadol all week. Today unsurprisingly, the pain is worse, or maybe he is just worn out with it hurting. He's taking whatever he can get his hands on which is not a lot in this place, unless he wants to have a go at the morphine shit for my knee and he's a bit reluctant about them.

The Rooter toot tooter, didn't mention that Steve should expect any pain last week, though he did get some kind soul to call yesterday to make sure the patient was up for round 2 today. I guess there are a lot of people who think dragging out the inevitable is a good plan, but not Steve and I wouldn't either. I was a bit put out that I wasn't sent running to the chemist for some prescription drugs as soon as he got home. The guy still gave him nothing.

It beggars belief that Rooty doesn't prepare patients for the pain, but perhaps he has become ridiculously blaze doing this every day.

As a good girl I fronted for my usual check up today, so Steve wasn't alone in the Dentist story. My visit was open prod find a couple of cracks, have a little cry and outta there, so nothing in the slightest to whinge about. 2 more visits, 2 panic attacks and a flash of the mastercard and I am done til next time....Yippee kayee. I am trying not to rub it in.

The suicide rate for dentists is reportedly the highest of any profession. And this combined with all the other yukity yuk yuk, makes me wonder how anyone ever fronts up to study dentistry in the first place.
Posted by Unknown at 17:35