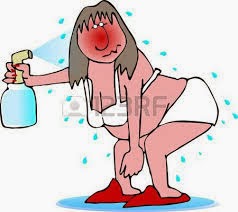 I reckon if Hitler had been Australian, he might have been less than impressed with the look of the ARYAN RACE. I doubt it is necessary to cop to not having much of an historical insight here, I am just saying.

It's all very well thinking that blonde blue eyed folk are pretty enough when they are indoors and it's chilly and they are wearing scarves and boots when they venture outside, but here in the land of the 'ain't it fucking hot today' I reckon they are less than attractive.

Now he might well have rejected me cos I have green eyes, and that might be why when I get hot, really hot, way before I start to sweat like a normal person, I go beetroot red in the face and look like I could collapse at any time with a heart attack or exhaustion.

Back in my Netball days, I would run like a maniac and the puce factor would rise and rise. At about half time I'd be so red in the face I could see the glow reflecting off my own cheeks and I felt like my eyes were gonna bug out at any moment. For the festive season I could have rented myself out as a fun decoration but at other times, it was just plain disturbing. It wasn't until almost 3/4 time that I finally started to sweat and then it was like someone turned on a tap. Not very lady like, although neither was taking an elbow to guts or falling spread-eagle on the floor after going for a rebound. It is not always an elegant sport. But I digress.

'Today it's hot, darn hot', how I wish I could finish that great Robin William's line form Good Morning Vietnam. I was up early to do my Christmas cards which I enjoyed, I ran Dog and then walked across to the village to post my cards. Just a little later I walked back again with anothery and to get some coffees and when I walked into Avril's place, Laurence looked concerned cos I was red in the face. Bloody hell it was only 10 in the morning, and my face was just gonna get redder and redder before I started to leak.

We had a visitor and he must have wondered what the fuck was wrong with me, but he plodded on with his business steadfastly ignoring the cartoon next to him.

Just because I didn't think I was quite red enough, I decided to weed my little garden and mow the grass. Yippee finally some sweat!! But don't be thinking that just cos the sweating started my face was any less ruddy.

If Hitler had been visiting this afternoon he's have had to have had a real good re-think.
Posted by Unknown at 15:55