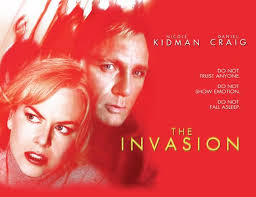 It was ironing day today to get Steve's stuff sorted for London, and that meant turning the tellie on and suffering through shitful morning TV including infomercial after infomercial about how to be thinner and cuter and younger and for only the cost of a small car. I suppose I should be pleased that it took longer than I thought and consequently for my viewing pleasure I was thrown into the horrors of "The Invasion" Nicole Kidman and Daniel Craig, how bad could it be huh?

Well I don't do well with horror movies. I have absolutely no problem 'suspending disbelief' and falling headfirst into the gore and the misery and the general mayhem and horror. Years ago I went to see a double bill of 'Misery' and 'Silence of the Lambs'. I spent a great deal of the time with my hands over my eyes and more than once I fell off the chair onto the floor. I felt sick with fear.

Today however I thought it would be cool cos it was DAYTIME and I was ironing and there were so many ads for rubbish no one needs. The premise was simple enough, some alien disease making the world into Stepford people and Nicole and her son were anti the idea and the kid was immune so quite helpful to mankind.

The ironing was done so my arse hit the chair and I watched the last half, ads and all. Well even though it is a pretty shit movie and even though it was bright daylight and the ads were a constant interruption,I still managed to squeal like a stuck pig and throw my arms around like the maniac with a knife in Hitchcock's shower scene.

It's always a good idea to test yourself from time to time, and what I discovered today is that
I am still just a big baby about scary-manary movies.
Posted by Unknown at 22:09