Back to the old Laptop. 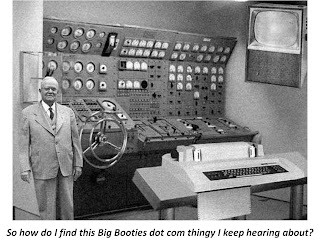 Steve is taking my little girlie machine to London with him for a month, so I am re-acquainting myself with the old lap top. I am loath to be too rude about it cos I wouldn't be the least be surprise that it understands and stops working altogether just out of spite.

It is remarkable just how quickly your brain and fingers can adapt to newness. I have found myself swiping the screen and then having a little laugh at myself, maybe if the laptop is aware of anything at all it is enjoying the stimulation. My girlie is just much quicker and more responsive than this old relic, but as it has been in the family for a long time - long in terms of computers I mean, I do have shoes that are older, I reckon that it will probably limp along a while longer.

I find it amusing to realise that as modernity hits these machines, they get smaller and faster and at the same time I get bigger and slower. Ho hum.

But not everything technical has shrunk. We were looking for old phones for Steve to take and they are much smaller and lighter than the new smart phones. So maybe at least with phones the smarter they are the heavier and bigger they are. That means I must be a phone!!

I remember well the first time Belly and I headed off to London. The preparations went on for months and we could taste the excitement and nerves. And later when I headed back to find a job and live for what turned out to be much longer than I had planned, I was more than  a little nutty getting sorted to finally get my arse on the plane. I carried so much hand-luggage that I could barely make it down the escalator at Brisbane airport. It wouldn't be allowed today. See... computers are smaller so too must be your carry on stuff.

I suppose there is a nonchalance involved in Steve heading back home. It is all so familiar with the great unknown nowhere to be found. Getting onto a plane and heading off to the other side of the world is now a bit ordinary.....it's like going for a very long peak hour time train ride home.

So the little girlie is off on her first OS trip and I hope she behaves herself. She certainly doesn't take up much room.