We are trying to grow grass 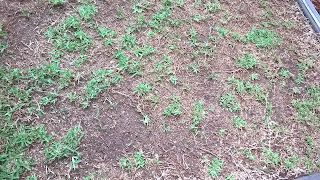 Here's just one of the patches we are trying to repair! 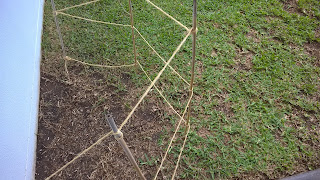 This is my silly little erection to keep Dog at bay.


Years ago when I was but a slip of a single mum and was trying to entertain us both for the princely sum of bugger all, I met up with a strange sort of fella at a square dance. Yeh it's ok to pick yourself up off the floor now, cos I reckon it sounds unlikely too, but it's just a bit of my odd-ball past.

The poor old Corolla would be filled with kids and blankets and leftover bits of food and a torch or two and we'd all head out to find - long pre-satnat so via the street directory, that week's obscure field at the arse end of buggery, where the bands and the callers would be.

It was free entertainment and the leftovers always tasted better outdoors, in the dark. In the winter this was quite the adventure with open fires and kids running everywhere and the dancing was all a bit hectic and random.

So I met this fella, Allan, who sometime later became Julie, but that is a whole other story. He, then she, was all a bit alternate. He had me drinking wheat grass smoothies and I drove him everywhere cos he had no car and no cash. I must have found him interesting, cos now I just can't recall him bringing anything to the party.

One child free weekend he fancied a drive to northern New South Wales and I was happy to oblige. We ended up visiting friends of his in the hills behind Murwillumba. They were odd and I didn't want to stay cos I was heading for the beach, but as it happened we had stayed long enough for him to have bought a good sized baggie full of grass, not the sort of grass we are trying to grow now you understand, grass grass, and as a teacher, I was worried for the of the rest of the day that I might get pulled over and be found with the bag full and then I'd be given the sack and my girl and I would be out on the street. I remember the panic and the argument and the dropping off and the never seeing again as Allan. Yeh I did see Julie some long time later, when I took her to buy good underwear but again, that's a whole other story.

It seems pretty clear to me that the growth industry in rural Northern NSW was and more than likely still is, the cash cropping of weed. And I mean why not huh? The weather must be perfect for it and the properties are pretty isolated but still accessible for the punters. The sugar cane prices varies and the crops have been known to fail, but there is no such gamble with the weed crops. They flourish under the leafy canopies and the market seems endless.

But the thing that confuses me is this. We can't grow ordinary old grass in the front yard. We are not far from the weed growing capital of Australia, and we can't grow a bit of Sir Walter Buffalo. For about 6 years we've been giving it our best shot and still we are failing. The local grass layer bloke installed a good covering of the stuff at an appalling price and since then it has just failed in varying degrees. We water and fertilise and patch grow new bits but the handkerchief bit of lawn seems to be beyond us. The back yard of my Brisvegas place had grass that you couldn't kill with a stick but this bit of lawn which is tended and preened seems hell bent on giving up the ghost.

Dog does her bit to kill off a little corner that I have today roped off, but apart from that it's all a bit of a fuck knows. Today we tried again, with Steve roughing up the surface and I sowed the seeds and fertilizer. And the rain gods have been kind so I guess we just wait and see.

It's all a bit of a pissier, cos the price of this sad bit of greenery, we could have concreted the lot, and still bought a small island paradise in the Pacific.

Have you any suggestions about how to grow grass grass - not the weed grass?
Posted by Unknown at 16:59