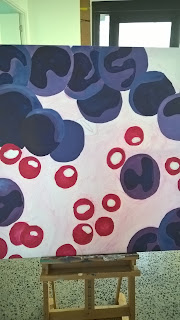 Just the background - like the opening gambit, the dynamic splatter is still to come.


It's NOT my turn, so no panic attacks today.

It's Stevie's turn. He's going for some root planing.

Now a few decades ago I could have convinced myself that any sort of rooting could be conjured to be sexy and smile making, but the very idea of having a dentist with his arms up to his elbows in your mouth shaving off bits of root / bone, well I am pulling that 'Ooooh Yuk' face and only Dog is here to see it.

It might just be panic attack avoiding wishful thinking, but I never really expect anything to got too terribly wrong with teeth and I don't know why, cos there sure has been a shitload of stuff go wrong with mine.

Oh sure I can see that holes need to be filled and sometimes wayward little fuckers need to be pulled out, but a couple of weeks ago Stevie had some sort of a shelf bit of tooth that was growing the wrong way,. This wasn't one of those useful types of shelves on which you can display important things like your Oscar or your 3rd place ribbon from the year 4 Tunnel Ball competition. Nope, this fucker had broken off and there were little bits of tooth floating around like flotsam in his gums. Now who would ever even dream up this shit? And I don't know what the 'Round the head' Xray showed but now some serious scraping is in order.

I reckon I would need to be sedated.

I suggested something softish for dinner but as his mate's boy is landing tonight, I think he wants to feed him up, so steaks are on the menu. I am making that face again just thinking about chewing it and all that extra scraping on the gums.

But it's all very modern isn't it.

In times past, teeth just rotted and fell out and in the recent past some dentures were shoveled in and the distant times gaps were tolerated or maybe even thought to be sexy?

But that's the way of the world I guess, years ago, I'd be dead and there'd have been no such stuff as blood tests and pathology to find out why.

Modern science is scary but wonderful too.

I have started a painting of pathology slides of leukemic bloods. They are beautiful. The Philadelphia white cells are pretty fierce and confronting, but I am looking forward to overlaying them on top of my opening gambit.

For any Pathologists out there, I am aware that I have taken an artist's liberty with the colour, but I have never been any good at following the rules or colouring by numbers.


How does modern science help you?
Does science scare you?
Posted by Unknown at 14:30