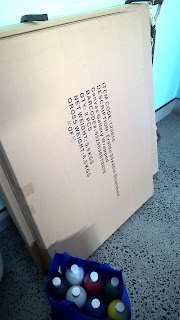 Earlier this week I proclaimed that the Internet was NOT making me lazy, and I still stand by that.....for ME, but I do wonder about how bamboozled people have become when they need to go back to working out sums in their heads cos someone has questioned the computer tally.

Consensus of opinion this week, both friendly and professional is that my mind is in a bit of a funk and that I would do well to get back to some painting, not the kitchen ceiling type of painting, but the slapping on of colour onto a canvas type painting.

I admit that I was initially reluctant and in funk fashion found many reasons why it was not a good idea, but my reasons were frayed apart and so I sat there today with no good reason why I would not try to lighten my mood by doing something that I love.

Tomorrow I am gonna return my studio to STUDIO instead of the bedroom it has become and chuck out all the moldy old paint and other assorted shit I have been hanging onto for years and get ready to open the 2 boxes of new canvases Stevie and I bought today.

By a bit of serendipity I got an email from a local art supplies store yesterday saying that they were having  a big half price sale on paint and canvases, so that was the last of my excuses shot to shit.

Off to Robina we popped. The selection of paint was easy cos I have always bought the same stuff and it's like riding a bike. I spent more time on canvas selection. I got 2 really biggies and 2 little biggies.

The guy gave us a total without the discount and then the REAL total. It wasn't half of his first guess. Even I - who vowed never to do Maths again , could see that. Steve pointed this out and gave him the right answer pronto, just by using his head. Then he popped off to Woolies to borrow a trolley to balance all my loot back to the car.

Well the guy was flummoxed. I think he could see that Steve had it right, or maybe he couldn't but he didn't want to argue, but he just couldn't get the computer to see it Steve's way and he all but had a little melt down. The phone was ringing and he was the only one there and it was a pretty big order so he didn't want me to walk so he kept changing the stuff he was entering until he came up with a price that was less than Steve had said and then he seemed to be satisfied.

The final figure was just silly. I flashed the card and we did a circus worthy juggling balancing routine to get it all to the car.

Steve took a look at the docket when we got home, cos it worried him that he just couldn't work out the working out. Ah, it seemed that the dividing by 2 and adding up had been mixed up. and the order of the functions had been turned inside out. His year 3 onwards maths had been forgotten and because he was so reliant on machines he just couldn't come close to the right number.

My hope is that he won't get into strife for the under charge although how anyone would be able to find it I just don't know.

If I manage to make anything even half way decent with these canvases they will be the cheapest art I have ever hung on a wall.
Posted by Unknown at 17:49