The Old Girl is being Microsoft resistent 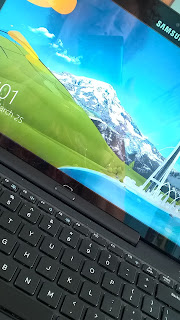 For some weeks now I have been warding off notifications from the gods about when I want to install Windows 10, and rather than answer 'em, I have just been clicking the X in the top right hand corner and it all disappears, until next time, that is.

You might remember that I gave 10 a go while I was in London last year and it seemed flawed to me, not at all easy to get along with. I like to KISS - KEEP IT SIMPLE STUPID, and so wasn't keen to learn a whole new way of doing shit. Anyway, after I installed it, I spent a few days uninstalling it cos it gave me the shits. I have not been rushing into popping it up again.

But, the Old Girl has been fucking around and not in a good way. The size of font changes without request and the pages sort of swirl all around like the ceiling after too many voddies. My photos have disappeared and reappeared somewhere else and I reckon She was trying to tell me something, or maybe it's the computer gods pushing me into doing something I don't want to do.

A couple of days ago, She decided that it was time to 'RECOVER'. No She didn't take a Bex and have a good lie down, instead the dreaded blue screen appeared and about 24 hours later I am left with what I imagine was on the Old Girl when she first came to stay.

And in theory that might be ok, except that it just sort of doesn't fit anymore.

I have a whole wardrobe of clothes that I love from a different era, that I rather doubt I will ever be able to shoe-horn myself into again, but I do love looking at 'em from time to time and as space is no problem, they just hang there and do no harm.

But Her old gear is not that specie. I mean no one would be keen to spend time with an old worn out pair of skid marked knickers and that's what this old shit is like. I admit to being surprised that I am able to tap this out.

I have a theory that the computer gods have decided that as this is a religious holiday they are gonna pull rank and force my hand and I am thus waiting for that bloody sign about up-grading to 10. And as I am not enamoured with what they have left me, and as I reckon there must have been some tweaking done since last September, maybe it won't be too bad.

But I do imagine that my penance for disobeying before, will be that the invitation will come at the most inconvenient time and the installation will be difficult and perhaps not initially successful.