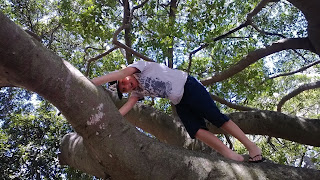 Most of my growing up happened at Wynnum, a bayside suburb of Brisbane. It was quite the parochial backwater.

Back in the day the only real way of getting back into Brisvegas Town was on a rattle rock'n'roll old cattle train which was neither flash nor fast. Consequently mostly people stayed put and gossiped about their neighbours.

There were 2 high school and there was quite the partisan divide. I don't know why, but I don't reckon I knew anyone from Wynnum SHS but at Wynnum North SHS everyone seemed to know each other. The other school was not far away and we played sports against 'em but I didn't know 'em. This is striking me as more than a little odd as I am sitting here thinking about it.

Anyway my formative years were spent out of the house. We'd all meet up at the foreshores and play and chat and fool around. A lot of learning went on.

This is where I learnt to climb a tree . Yep skin was scraped and wind was knocked out but the views from the top were always worth the effort.

This is where I learnt to breath through my mouth to avoid the stink of the mudflats at low tide.

This is where I watched sabot racing friends whip all around the bay.

This is where I spent long hours on my own thinking shit and wondering about the clouds.

This is where I smoked a lot of ciggies and then naively chewed up PK gum to hide the stink.

This is where I learnt the fine art of snogging, and where break ups and hook ups happened.

As I said a lot of learning went on.

There was nothing there, only trees and water and a run down cafe and the long pier from which we jumped recklessly risking life and limb.

Today I took Zig on a little date back to my childhood.

The tidal pool which was fine for cooling off in, but less than flash, has had a remarkable makeover, with concrete steps and stainless steel rails into it - all very safety sanitised. There are concrete paths north towards Lytton and south all the way to Lota, as well as all around the very flash and very large changing facilities and Unisex loos and the combo kids' playgrounds, yeh there was more than one. There is a car park and the shabby old cafes have been tarted up and offer alfresco dining.

Zig had a damn fine day. He swam and swam and then played for a long time on the climbing rope thing. I watched him meet new kids and hang upside down. He popped back to me every now and then to make sure I was watching not spending too much time on my phone.....Funny how they would trade you in for a bit of tech at home but outside they want your undivided attention.

Anyway on one of his visits back I suggested he give the tree a bit of a climb.

He started off a little unsteadily. He was wearing his thongs after all which I suggested might slow him down, but you know 10 year olds, they know it all. Up and up he went. He calculated at each turn whether he was gonna make it, if his legs were long enough, if he had a good enough grip and if the branch was gonna hold his weight. I contributed nothing, no advice and showed no fear. I worried that I might have to deliver him home dented, but the risk was worth it. This was kinesthetic problem solving at it's best. I thoroughly enjoyed watching.

The tree he climbed today was the only one to get a work out. Yeh they provided shade to us oldies but I did not see another leg being thrown over a branch, and that seems sad to me.

He plays 'Minecraft' and I know that there is some problem solving involved in it and his other XBOX games that I call crap, but it just isn't the same.

I am a practical learner. Yeh I can read and I can listen, but I learn best by doing, and as a Drama teacher I have watched kids with similar brains physically work things out, for more than 30 years.

I wonder what will be the upshot of all this techno learning at the expense of doing learning.