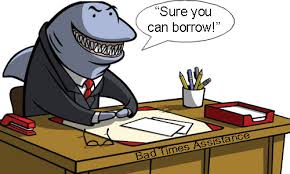 There's really something here that I just don't get. Our governments and councils can tell you where and how to put up a tent in your own back garden, and they can insist that you install a water tank in a new build and that it is connected to your washing machine tap, but when it comes to regulating the rip-off agents who prey on folk with fuck all anyway, well the powers that be just throw their hands up in the air and hide behind free enterprise philosophy and democratic choices.

Only a truly desperate person would consider applying for cash from these sorts of places. The establishment fees are appalling and the interest rates are just absolutely staggering gouging.

And then of course there are the shitful ads.

They all give me the screaming irrits, but the latest one which shows a young woman's home-coming after a holiday, is particularly irksome. She walks into the place where she is presumably listed on the lease and where she pays the rent, to be accosted by a few low life blood sucking arsewipes who have moved in while she was away, and she finds herself unceremoniously, powerlessly, evicted.

She needs money in a hurry to pay for moving costs and a deposit on a new place.

What the very fuck??

How it is OK to present women in this predicament beggars belief.

Who thought up this shit? I just do not for a millisecond reckon that a woman put forward this scenario.

So now poor people are being exploited and women in particular need to suck up whatever and cough up the cash under any shitful circumstance which sees men gleefully treating them like shit, and then they continue to pay through the nose for it all. Because of course women are powerless fools who have no mainstream choices and somehow deserve to be put out on the street by a bunch of dickhead men.

I don't enjoy government legislation and interference especially that which affects me when it's designed to somehow protect the dumbest and weakest, but it is a fact of life. How is it then that these sort of sharks are allowed to continue. Surely protecting folk who use these services should be more of a priority for the government than so much of their other bullshit regulations.

Every time I see one of these ads I fancy hurling something at the tellie, but then I'd have to buy a new one and for that I might need to apply for one of their shitty loans at the cost of something like $400 establishment fees and between 40 and 50% interest per year. That would be a very expensive bit of equipment.

I reckon at the very least each one of these ads should be followed by a government funded ad giving alternative choices and advising people to not touch these companies with a barge pole. That use of public money I could live with.
Posted by Unknown at 17:31