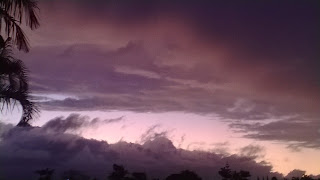 Surely I am not the only one to recall with great fondness and perhaps a scratching of the small scar on my arse, the wonder of the storms in my youth. No I haven't taken to bending over and proffering my bum up as a lucky Buddha scratching pole, I am just have a little remember.

I don't reckon the nature of the storms have changed much, but the attitude has done.

I grew up in the hilly suburbs of Brisvegas' inner east, and when it rained as now, it really pissed down. All too often, as now, the clouds burst just as school chucked out and that was just bloody marvelous, cos it meant that I could take my shoes and socks off, shove into my cardboard school port - which did not enjoy the rain as much as I did, and I could paddle all the way home.

When the rain season started, the gutters were just dried up tunnels of dust and leaves and people's rubbish, but after a month of rain and the on going sploodge of humidity, which saw mold growing on everything and I do mean everything, I reckon fungus on the whatsit was a common complaint at the Doctors from people who sat still for too long, a delightful film of slime would appear in the gutters.

Now I didn't have a skate board or a scooter or a pushie, mostly cos skate boards hadn't been invented and my older brother had the other stuff cos he was a boy and then when he broke 'em or sold or did whatever he did with 'em, well the oldies just decided that was it for us all.

So for most of the months of the year I just walked everywhere.

But in the stormy summer months it was possible to slide and slip and skate almost all the way home.

The rain would be driving hard into your face and barefooted I'd step into the slim and ski down the gutter. It was bloody brilliant fun. Yeh of course sometimes I fell over and then I'd slide on my cotton-tailed arse for some distance. The old woman was not thrilled with the holey undies. If I was having a clumsy half moment, I'd fall forward and end up with a bit of a gravel rash, and as I am writing I am remembering a particularly brutal patch all over my knees and legs which was filled with gravel and gunk. Yeh it was painful, but it didn't stop me going again.

One year there was a bit of a flood and I had to literally swim around the corner to meet up with mates.

The thunder and lightning scare the crap out of Dog.

Kids call or text their parents and they are collected from school.

People delay their travel to allow the storms to pass.

And bugger it, during yesterday's thumper, I insisted we get out of the pool in case there was a lightning strike and we'd get electrocuted. Fucking hell, I have officially become OLD.

We are thinking about getting the Grandie a Go-Cart for Christmas and I just wonder about how we will feel when, as is inevitable, he pops home with a gashed up leg or what ever.

My whole body is covered in scars which range from accidental to curative, but today's lot have mostly perfect little bodies, which of course is all very lovely, but doesn't speak too loudly of experience.
Posted by Unknown at 07:52