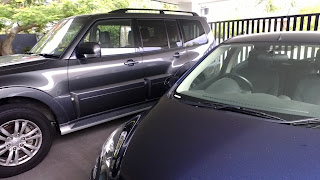 The Big House is the home of the little big cars. Steve has a monster truck which is excellent for moving his golf paraphernalia and DOG and for whipping along on those long stretches of empty beaches which is really one of my most favourite things to do. I have a little wee girlie just perfect for, well just about everything else. It's tiny so parking is easy-peasy but the hatch boot is plenty big enough to famously bring home a full sized bath when we were building. It has cruise control so I can avoid getting on the wrong side of the coppers as I tootled up and back to Brisvegas at least once a week, but Dog is not as keen on clambering into the back cos there is not room for her bed, although, she'd rather slum it in the littlie than stop at home on her own.

Because of the race up the motorway, my girl gets more of a workout than the monster, but if we are off into the wilds of fuck knows, then we take the big fella cos it's more likely to survive the drive and Dog is happier and that's important.

Steve'll drive mine but the number of times I have driven his, you can count on one hand. I just don't like it. It's too damn big to park and sometimes I feel like it doesn't even fit in the road lanes - yeh I know it does, but not by enough. If we are out in the bush and space seems limitless I am happy to put the foot down but definitely less so in civilisation.

What I have noticed on my race to Brisvegas, is that if I am to have any grief from any drivers it almost always is from some dick in a great big car. You know the walloping ute, randomly stacked with shit that is wobbling all around, that screams up your gunoo even though you are in the slow lane, and then tries to bully you into going faster than the limit, or the 32 wheeler bastards who are in 2 lanes and weaving into a third, lights on full beam, who are in such a hurry that they must almost certainly be transporting a vaccine to a dying patient somewhere in another state.

It seems to me that the bigger the car, the more chance of being bullied, I mean even if I fancied it, I rather doubt it would be possible for me in my little Mazda to bully anyone, except perhaps an old fella on a pushie, or a woman pushing an ancient stroller.

I reckon the bigger the car, the more invincible the driver feels.

I reckon the bigger the car, the greater the chance of being bullied.

I reckon the bigger the car / truck the greater the chance of it being driven by a dickhead.

Don't ask me where all this is coming from. It might be the very many near misses on the M1 or it might be the jolly great dickhead who very nearly wiped me out this morning when I went to collect my car abandoned last night at a local golf club.

Yeh I shouted, 'You're welcome Wanker' as I squidged over.