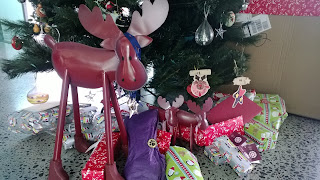 My Nanna was the quintessential Matriarch. When she said jump everyone jumped. She had done all the right things. She had married a bloke who went off to both wars and she stopped at home and waited for him. She had 4 kids though sadly her boy died when he was little but her other 3 had bred well so there was a large brood of grandies to keep her company too. She had plenty of love to go around and whilst I am sure she got cranky from time to time, it's not a glaring memory, mostly I just remember her as being lovely Nanna, the patient provider of all things sweet or wonderful.

Yes we jumped when she wanted us to but that was because we wanted to, not cos there was any great big wacking stick involved.

So Christmas saw the gaggle of family - aunts, uncles, and kids crammed into her house for a lunchtime meal which she had prepared. Back in the day when I'd had no choice, we had been herded off to church and sung some carols which apart from the words I quite liked a lot, still do really, we'd put on our best frock and proper shoes and gather up our bits and bobs of homemade stuff  and then head to Nanna's.

20 odd, and I do mean odd, strange, weird, and some a little bit scary, folk were wedged in for food and parcels and singing and games and more food. Sweat poured along with the beer and the wine and the cordial, and there was actual proper competition to see who would break a tooth on the sixpence in the pudding.

But today things are different and the only broken tooth was Dog's.

Yep that's how we spent the eve of the Big Day. Poor love had snapped a tooth in half, playing ball catch in the pool. She's a competitive thing and doesn't like to let anything passed her. I think I heard the sickening sound of the snap, but she didn't cry, she just kept licking her mouth as if she had eaten a thousand donuts. We finally were able to have a little look see and there it was a gaping space where her wee front tooth should be.

So off to the Vets. We were given 3 options. 1. Do nothing and risk a thumping infection as the root dies - oooh yuk, the pain is real!  2. Take her to a specialist orthodontist for dogs - who knew there was such a person? and have root canal work and get a crown made. Yeh just like a person, so she can keep her winning smile. 3. Have a bit of surgery to remove the tooth immediately so she should be good to eat up her chrissie treats in the morning.

Well we opted for number 3.

The people at the vets are wonderful. She was returned to us in the afternoon, still dopey from the anesthesia and the pain meds but she was OK and would be home to be on duty, in case Santa tried to blast his way through the doors.

She had a little bit of soft dinner and she slept up on the couch with me as always, except that she was too wobbly to drag all 4 legs up so needed a bit of help in the climb.

The pain meds had done the trick and by start of play on chrissie morning she was OK. She wasn't back to her normal boisterous best but she did manage to open her parcels and she enjoyed her smoked salmon and scrambled eggs for breakfast.

She was still a bit off with the fairies and lay on the floor using my feet as her pillow while we played our new games of Card Monopoly and Dominoes. This seems to be our tradition. We are both too old for all that modern games playing so oldies are still the best for us, even though we did move into the 21st century with the Monopoly cards.

We figured she needed a bit of air so we popped her in the truck and took her off to the big dog park. She happily chased the ball, while I played 'Make a million bubbles' I do love watching the bubbles fly in the air, and I often wonder what the secret is behind the detergent stuff that comes with the wands, cos ordinary stuff just doesn't cut it.

Back home for more food and a bit of a sleep on the couch, - me and Dog, while Steve made his chrissie puzzle and cooked a wonderful roast dinner.

Dinner was a feast and Dog was back to almost normal.

When we left, the Vet gave us a bottle of Doggie pain meds, well when I say, GAVE I really mean sold us 40 bucks worth of drugs! For that sort of money you can buy a shed load of panadol, but I wouldn't be game to grind up a couple and slide it into her food like I might do for Zig, she's a dog and I guess she needs Doggie stuff. We haven't given her any and she seems to be OK. If some druggie breaks in and steals it they might well get more than they bargained for, cos I reckon it would knock out a horse - maybe I should find a dodgy street corner and see if I can unload it. I wonder what I would wear to a drug deal?

So chrissie is done and dusted for another year. Yippee. I can fold the tree away, do something creative with all the leftovers, and put the credit card into storage...oh who am I kidding, now it's the sales! Yippee. I do love a sale!

I hope there was no salmonella or broken teeth at your place.
Posted by Unknown at 08:23