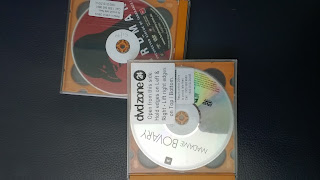 I fancied a little movie marathon today so I popped over to the vid machine and picked a couple of pictures I haven't seen.

Just as an aside, am I the only one to lament the passing of the video shop? Oh sure the machines are convenient - there are 2 in the village shopping centre now, but I do miss wandering the shop aisles and selecting weird old movies and stacking up the boxes and getting some pile of sugar and hydrogenated fats, all ready for an estrogen fed afternoon. My girlie and I used to do this fairly often. Sometimes if cash did not allow for all the bought feasts, I'd whip up a batch of picklets and we'd lounge on the floor and gorge on an Aussie girls' version of devonshire tea, and very often we'd fall into a sugar coma mid film and have to start again.

I don't enjoy standing at the machine flicking through the titles so I usually settle on stuff pretty quickly. Today the second tile in was 'Madam Bovary'. Yep that would be good. Nothing like a bit of existentialism to brighten up a Saturday afternoon. Except of course I was having a complete brain melt.

I watched the movie. It is beautifully shot and the story line was ok. I was surprised that the historical era had been changed and I spent the whole film wondering when Jean Paul Sartre was gonna appear, but there was enough existential philosophy lived and discussed to convince me that I was not confused or worse still WRONG, it was just an odd interpretation of an unusual love story.

The credits rolled and then the penny dropped. It's amazing how dull your brain can be really - Bovary is not much like Beauvoir really. What a dick!

I am happy enough to have watched the film, even if I must admit that I slipped into nanna nap mode midway through and had to re-wind back to the bit I remembered. I would however have much preferred to see a movie showcasing the Sartre / Beauvoir romance, as I find their era, the philosophy, the fashions far more interesting.

I also picked up 'Birdman' which I wanted to see at the pictures, but just never got around to it. I reckon we might settle into it tonight after some BBQ snags., yep I am living dangerously! And then I have to remember to run both the vids back before the 24 hour bell chimes. I haven't read the fine print, but I bet there is some appalling penalty automatically applied to the old AMEX card - no flirting your way out overdue fines like in the old days.