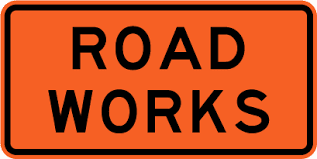 There should be obvious signs of Road works: People sweating up a storm, Engineers doing a lot of pointing, Big bit of equipment humming away, and the requisite traffic nightmare.

There are Road Works all along the M1 all the time.

I enjoy the drive to Brisvegas every week to see the Kidlies. As soon as I am out into the 110KPH zone, I set the Cruise Control and turn up the radio and sing along badly. I am not an aggressive driver. It takes way too much adrenalin to speed up the bum of someone who is poking along in the wrong lane and blast away and bully 'em til they move over. I just change lanes or hang back, cos I like to enjoy the ride.

That's not to say I am completely meek and mild, but I don't generally suffer road rage. When there is a traffic jam I go all 'Que Sera Sera' cos what else can you do. If it is miles and miles and I am gonna be late then that's different, then I have been know to thump the steering wheel and turn on talk back radio so I can rant at real people rather than the road.

But what does give me the screaming irrits is when you are driving along in the slow lane at night with the Cruise on and the volume thumping, you come across a big old sign WARNING of Road Works and telling you to slow down to 80KPH. Yep I slow down. Then a little while later there is another walloper sign ROAD WORKS SLOW DOWN 60KPH, and this time there is a sign indicating that the slow lane I am in is ending and so I need to slow down to 60 and move across. 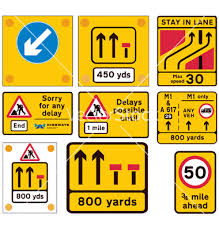 Now the thing about driving at night is that it seems people reckon they are invisible so the speed limit is only a suggestion. 4 lanes of traffic all going like maniacs, except if you are in the really slow lane, there is no complaints cos there are plenty of overtaking options. This becomes more problematic when the lanes are reduced to 3 AND I slow down to 60KPH. There are headlights up my gunoo and fists waved in anger as I am swooshed passed.

Last night I followed the rules for some miles, before I did what everyone else was doing and that was IGNORE THE SIGNS.

There was no road works, no sweaty folk, no pointy pointers, no big machines, no blinding lights, and the only hint of a traffic holdups was, well, it was me!

There was no sign shouting that the road works were ended and that I might safely pull left into the slow people's lane. So I stayed too long giving people the shits.

Those bloody signs are a hazard. Warning drivers of a hazard where there is none is just crying WOLF.

Next week on my home and I see those signs I might only slow down to 80KPH and then the week after I might be like all those dicks last night getting up me, I might not slow down at all, or pull out.

Of course the trouble with crying WOLF is that if sometime in the future there is ever road works, who is gonna believe it? I could end up bumping into a bloke with a shovel or causing a major pile up as I try an emergency merge.

Seems that the fellas whose job it is to cover the signs go home early and put the rest of us at risk. Or maybe it was just yesterday and they had all skived off to the EKKA with their kids.
Posted by Unknown at 08:37