A Day of Strangers 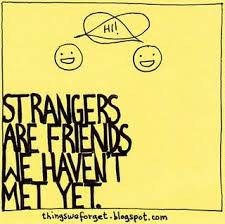 Yesterday, Steve was having a Mexican stand-off with Dibley, who wanted to come home and go for a swim and so was sitting by the gate, while Steve sat at one of the picnic tables and waited for her to submit. He looked down and spied a very full wallet on the ground.

He brought it home and I was gonna set to finding the person using the White pages. Instead, I found a membership card for a surf club and thought they might be good for a bit of help. I rang them and whilst they rightly wouldn't give me Fred's number, they did take mine and said they'd ring him and get onto it.

Not many minutes later a relieved Fred called to say that his was well away from the park, infact he was nearly home - the very southern end of the coast. So we made plans for him to collect it tomorrow. I told him that there was a Twenty in it, cos I was worried that he might have had millions in horse winnings or xmas money and I didn't want him to think that I had nicked it. He laughed.

So today early, Fred rang to say he was close by and when he rang the gate bell I was happy to reunite him with his bum bulge, how do men sit down on that lot? He offered me the twenty and I was just happy to think that what goes around might come around.

This afternoon in that stinky filthy heat, we got it into our heads that it was time to sort the grass which has grown like topsy with all the rain. I mowed and Steve took charge of the whipper-snippering, cos I am a little afraid of that fucker. Anyway I was half in and half out of the driveway and saw a nice looking woman standing by the For Sale monolith on the footpath. When I looked again she had moved closer to the gate and was having a real good nosey inside.

Introductions were made and I invited Pam in. Indeed she is a pleasant woman. She's looking for a big place to allow combined living for her and her family. The possibility of transforming the study and the studio into a small flat just for her, separate but close by to family, was something she found exciting.

She had a thorough look-see and even hugged me goodbye. Yeh I thought that was a bit over the top.

It might come to nothing, but what it made me think is that I doubt anyone, including Paul, will be able to sell the place more honsestly or effectively than me.

It's possible I could have uttered those dreadful words, ' I reckon I could be a good estate agent, but only if I was selling houses I really liked'.

Permission is granted to slap me hard if I give that any real consideration.
Posted by Unknown at 18:52