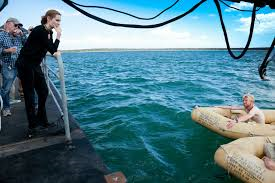 I thought I knew the story line but as described to Steve I got it pretty wrong from the get go. The lead was American not British.

And what a storyline. Harrowing and inspirational and left me a little hateful by the end of it, in spite of the platitudes just prior to the final credits.

This is Angelina Jolie's latest work and I reckon she has done a fab job. The cinematography is powerful and edgy and sometimes almost romantic, if 3 blokes in a life raft in the middle of the pacific could possibly be romantic. Their stench and sweat was almost palpable.

The strength of character was more than admirable, and the bad taste in my mouth left by watching the Japanese treatment of POWs was bile flavoured and very unpleasant. The movie was suspense filled and the lady behind me might have been less than thrilled with the involuntary jab of my arms into the air and my little gasps of surprise and terror.

It seems like a story about an Olympic champion turned soldier turned POW, might be a recipe for a blokey audience, but we were mostly women today. I guess that could be because blokes have other things to do at 10am on a Saturday morning, or maybe it's cos we were curious about how Ms Jolie's direction was gonna go.

I have no informed opinion about whether this movie should have been nominated for an Oscar, especially as I am yet to see most of the others, but it was definitely worth the $20 in the flash theatre. 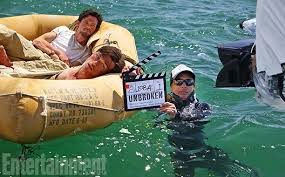