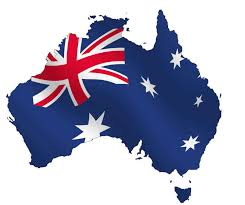 So when I was a kid, Dad would make a BBQ lunch for all and sundry and a crowd dressed in yellow and green would eat good food and drink way too much and sing songs and play silly games. It was a  such celebration!

And for a long time after he died, my house was similarly full with smiles and good cheer.

London in the dead of winter saw makeshift BBQs and poorly cooked snags and people from everywhere, having a little taste of OZ.

But today things are much quieter. We might pop to the beach if it's not too stinking hot and I guess I will make the usual Monday night dinner out of last night's leftovers - well at least it's lamb. But it is good to spend a couple of minutes to record what it is about being Australian that is so important to me.

I like it that my accent is identifiable just about anywhere in the world - well maybe not America, they always think I am a Pom, but mostly when I travel people guess correctly. It might be that I smile and look 'em straight in the eye and laugh out loud and happily share even an unpopular opinion or that I am possibly wearing thongs too late into the autumn even though that blue on my toes is not nail polish, or it just might be my accent.

Here on the Goldie we are so far removed from all the hideous shit the world serves on a platter. We are insulated and isolated and I think consequently more carefree - maybe ignorant. I am grateful that I don't worry about bombings and terrorist attacks and when I head back to London or indeed travel just about anywhere, I am not fixated on the danger, I just 'Keep Calm and Carry On', but that might well be the Pom in me.

I am pleased that I live in a country where my vote counts and even though it is a strange thing to be forced to vote so we can preserve our democracy, I reckon making people become involved in their government is ok. I like that I can sit and write any damn thing I want in this silly post and no one would have the right to take it down.

I enjoy cheering for an Aussie team in what ever sport on the world stage, and just identifying as Australian mostly bring goose bumps of pride. I'll sing at least the first verse of Advance Australia Fair out loud and badly and then have to mime and lipsync the second. It's a good anthem. I will cheer for England anytime unless of  course they are agin us. Too often I have been a lonely voice in the crowd at Twickenham Stadium singing up an storm and shouting for the green and gold, and while Steve might be cheering for Andy Murray when he plays Nick Kyrgios in the quarter finals of the Australian Open, there will be no question where my loyalty lies.

Sure there is stuff that goes on in the 'wide brown land' that is too often cringe worthy and makes me want to join the march - I am pleased that there is a march to be joined, and that opinions matter and sometimes though perhaps not often enough, make a difference.

Well all this sounds a bit lame really. I can't quite put my finger on what it is that makes me Australian, but I do know, even though I have a British passport hidden in a drawer, that I am a proud Boxing Kangaroo. 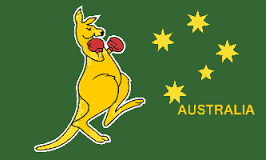