What happens to undelivered mail? 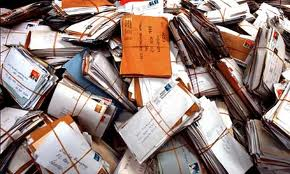 I order things online and because the Australia Post contractor refuses to deliver to my place - yeh a long a ludicrous story which truly beggars belief, I get a card telling me to front up at the Post Office with some photo ID and collect that which I have paid to have delivered. Every time I go the bloke there pretends not to recognise me so I ask again why it wasn't delivered and he tells me a lie and point out that it's a lie and he checks my ID and gives me my stuff.

Yesterday there was an expose of DHL contractors playing basketball with people's parcels and so I guess there is a chance of disappointment if you chose that delivery method.

But I know there are people who get those collection cards in the letterbox and completely ignore 'em. If they don't know what it could be they don't bother. Me, well I couldn't bare not to find out, even if it turns out to be a bit shit, and of course I wouldn't want to miss an opportunity to rile up the OZ post bloke.

But what happens to all the stuff that doesn't get collected? Yesterday I discovered just by accident that friends of mine, to whom I send silly things periodically, are no longer using their PO BOX. I don't know what made me ask but ask I did and found that they have not used the box FOR ALMOST 10 YEARS.  I roared laughing thinking about the silliness that would have been confusing the Aussie posties in Brisvegas central for all these years.

I reckon if I worked there I might very well have fallen into the temptation pit clutching the thicker envelopes just in case they hide something fabulous, but then I have not been through the surely compulsory seminars outlining the legal minefields to do with post tampering.

So maybe no one opened the stuff and it went straight to land fill. There must be tonnes and tonnes of mis-addressed  stuff that needs to disposed of. I reckon it would be ok if it was donated to charity on a rolling basis. There'd be plenty of nosey parkers who'd volunteer to open it and look for treasure. I reckon I would put my hand up for that.

I miss that anticipation of opening unexpected or unrecognised mail from the letter box.