Criminals in the city, Dog is scarey!! 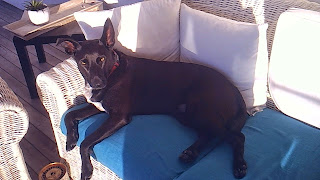 Golf day Wednesday means I have the place to myself and I do love the autonomy and peace and quiet interspersed with noise of my own choosing. I was pleased that all the ear bleeding noise of house construction from across the canal was missing today and so I phaffed around and then sat myself in front of the tellie to watch Mission Impossible 4 - recorded a while back.

So as my knee was aching and my mind was numbed through too little sleep I camped on the couch with Dog and took charge of the remote to fast forward through the ads. It was entertaining though not earth shattering.

Without really noticing when it started, I slowly became aware of kids and skater noise just outside the front gate, so I pushed the pause button and grabbed my crutch and Dog and went for a little look see. By the time I got there the noise had moved to outside Bev's, next door.

I waited and in good time the 3 boys came alongside my front gate. I just stood and watched and Dog went barking mad and I was pleased about that. 2 boys on their skate boards and 1 boy was seemingly scoping out the house. Well he was a brazen little bugger. He stood nose to the gate and told me that he liked my house, he told me this twice. I just said, ' Thank you.'

Dog clearly didn't trust 'em as far as she could spit cos she ran along the front fence - up and back, up and back, barking like a big bad dog. But scoper boy was not fazed by dog, instead he wanted an introduction, he asked if he could pat her, so as she continued to bark and bare her teeth, I said, 'Sure' He didn't quite have the balls to stick his hand through the gate. I was pleased to see this. We sort of eyeballed each other without speaking for a while and then the 3 of 'em buggered off.

I was pleased that through some serendipity and because it's hot today and the prevailing breeze was coming through the garage, I had left the door open, otherwise I would probably not have heard the little bastards, and then they might not have been introduced to my big bad girl. I hope that all this will have persuaded them that this place might not be worth the effort required to do their dreadful best.

They had to be up to no good. I am not one to jump to conclusions about young people, but these 3 should have been at school, so bunking  was their first crime and it sure looked to me that wagging school might be the very least of it.

What a shame this is. It's one of the pissers about living in the city, that you have to be vigilant about fuckers trying to break in and nick your stuff or just play silly buggers in your place with paint and bongs.

While we were building, little turds broke in to the shell and smoked their crap and graffiti-ed  all over the walls. The police came and took finger prints and actually found 'em but they were underage and so of course got off scot-free. And one quiet sunday a herd of over indulged little arsewhipes decided that it'd be fun to park their boats up outside our place and chuck rocks at the glass balustrades around the pool. They only left after I went outside and very obviously took photos of  'em all, but not before one of 'em got very gobby and told me I was breaking the law by taking their photos.

So nothing really surprises me anymore.

I'd like to think they'd all bugger off, but that's extremely unlikely. Ho fucking hum.