When is a sale not even a sale? 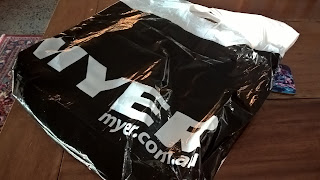 I have been buying my knicky-noos from Marks and Spencer for what seems like forever, and even though I now live back in Australia, once or twice a year I go online and they kindly deliver me a little package of exactly the same bits of cotton and lace fabric. Well for honest full disclosure, the package is not so little and neither are the bits of fabric mere whisps cos let's face it, it has to stretch over my rather substantial arse. But I have been buying the same stuff for years and have always been pleased with the reliability and sameness of it all.

Except that this last time the noos arrived and the fit wasn't quite as good - my arse and belly not quite as snug and comfortable as in years gone by. Yeh I know I could have piled on a bit, or maybe changed shape, so I persevered, until one day I happened to look down and see a big red ring around my middle and as it went ALL the way around, I knew it was not shingles related, even though it was the shingles that made me look in the first place.

I shimmied out of the noos and had a bit of a look see.

What I noticed was the waist elastic was very narrow, not quite sherring elastic but thinner than it used to be and the discomfort of the red raw rash shingles shit, was making it even more noticeably un-fucking-comfortable. It was as if I had tied a bit of string around my middle and pulled it tight. Ouchie!

I imagine that M&S must have saved a motza by reducing the width of the elastic even by a little smidge. Good luck to 'em I reckon, except that I won't be going back to buy anymore.

So I popped into Target to pick up some knickers that might be kinder on the rash and the felt like slapped bits.

I did not do well, so a couple of weeks ago I went to Myer to hunt out my old - long ago favourites and bugger me they were still there and so much the better, cos they were ON SALE - buy one pair and get the second pair half price!

So I bought 4 pairs. $19 plus 3x$9.50, and even with my rudimentary maths that is I think about $11.80 each. What a bargain! It might have been that the woman made a mistake and that she gave me the sale price on every pair after the first pair, but that was the price I paid. I have only just done this 'working out' as I am sitting here with a piece of paper and a pencil.

So I was at Myer again on the weekend and they are having their big end of financial year sale so I though I'd grab a few more pairs. Never could resist a sale!

The signs had changed.

At the time I wasn't certain that my last week's purchase was cheaper and I didn't have a piece of paper or enough fingers to do the calculations, in the middle of the store, but I was pretty sure that that was more than I had paid a couple of days ago and so it wasn't so much a sale as a big load of signage bullshit.

I pointed out to the sale's woman, that I was pretty sure the noos were cheaper before they went on sale, and she said, 'You don't have to buy them.' Yeh she was right but I could have done without the snark.

My point is that just cos there is a sign saying SALE, doesn't mean that there is one.

This degree of let the buyer beware bullshit is very disappointing. After all, Myer big notes itself as being a world away from the third world markets where everyone is on the hustle. Unfortunately it seems,  the differentiation between souk and the Myer sale is pretty slim. At least at the markets there is good natured banter and a universal awareness that things are not always as they seem, that slight of hand is expected and if you do run out of fingers to do the maths then you are better off walking away.

Do be wary of the SALE signs at Myer.