How Does Ita Buttrose tolerate it all? 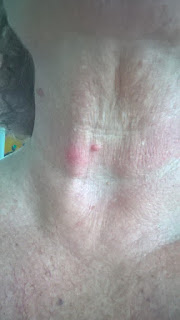 Oh Dear! Horizontal LINES and a freckly chest and is that an adolescent pimple to boot?. Shit!

I am not a morning TV kinda gal, which is a little surprising given the hours I spend stuffed into my chair eyes glued to the thing at other times during the day and night. I have never been a fan of all the noise and the hype and the bullshit with a side of Wheeties, and when my Girl was smaller than me there was enough to do to get us both out of the house with all we needed for the day without having to take a timeout for a bit more of the ol' square eye routine.

Back then, my days were filled with kids and noise and movement and my share of craziness, so perhaps I just wanted some calm to start the day. Ahhh a little bit of silence before the onslaught of 200 kids all bringing their own slice of  upset or joy. Reckon this is why the house was always pretty quiet for a while in the arvo too cos I needed a space to file away all that chaos.

Anyway the habit has stayed with me. I very rarely turn the tellie on in the morning, exceptions of course are world crisis news coverages, even though this is just on some loop of various lengths depending on the film footage available, and if I am doing the IRONING.

I used to mostly iron in the afternoons, perhaps because the tellie was better then or perhaps because I used as much imagination as possible dreaming up other things to do instead, and if I managed to dream up enough stuff then I could put it off altogether.

But now the mutant crunching Poison requires mostly morning activity cos the afternoons are for sleeping, or at least wandering in a bit of a daze, and I am sure that somewhere on the box the iron came in, it said, 'Do not to operate this equipment when under the influence of drugs', so yesterday with an Everest of Stevie's ironing needed for his London bag, the tellie was on for company.

Even on Saturdays there is panel bullshit morning TV - but I thought that would be better than saturday cartoons - are they even still a thing?

I just don't know how Ita manages it.

She sits in that studio with a bunch of folk with whom she seems to have a tenuous at best connection and she speaks words of wisdom. Her face never hides her reactions to the banal or the stupid or the PC bullshit. She's pretty honest I reckon.

And then to pay the bills Channel 10 pops in Jonno with some 'Infomercials'.

Yesterday Jonno buggered up the simple art of scrambling a couple of eggs in a frying pan so that dullards who are obviously even more drug affected than me, will fancy parting with 40 bucks to buy some container to shove shit in and cook in the nuker. The eggs it made, looked pale and anaemic and unappetising and I was pleased that I could not smell 'em cos I might well have lost my Special Ks.

I reckon Ita might have wanted to throw something at 'em both.  She knows that you can make scrambled eggs with any sort of extras in about the same amount of time as it takes the toaster to make the toast to go under 'em. Timing is everything!

It was for some shit to slop on your turkey neck to get rid of all those horrid horizontal lines. For fuck sake! It was just so much crappola, like the old fellas in the travelling circus selling snake oil or shit to make you taller or shorted or fatter or thinner or grow a penis or a smaller nose or whatever. The testimonial photos were clearly bullshit, doctored rubbish with before and after shots separated by megawatts of bold lighting and acres of thick thick makeup.

The panel desk can only be separated from the bullshit desk by a few metres.

I reckon if the camera operator had panned back to Ita, we might have been treated to some excellent footage of her really winding up ready to hurl the heaviest thing she could lift - perhaps the whole desk, cos she is invincible, right at those 2 fools carrying on about how ugly the natural signs of ageing are.

She is a fine looking older woman and I am sure she does make an effort to look the best she can, but she doesn't seem to want to look like she is 20, or even 30. She is happy in her own skin.

I know she must rationalise that the commercials pay her wages and that without them she might have to apply for the pension, but I am certain that this shit would not be her choice.

Marketing gurus must sit and decide that the demographics of morning tellie watchers is old ugly stupid - nah brain dead, lazy, did I mention STUPID, wealthy women who are ironing and therefore not paying much attention, so they programme the ads for the most useless expensive shit for that time slot.

I wish they imagined pitching to Ita when they decided on the Ad formats, cos I reckon there would be a huge improvement in the pitch and the products.

What ads are giving you the shits?