Boys' Jolly = What am I gonna do today? 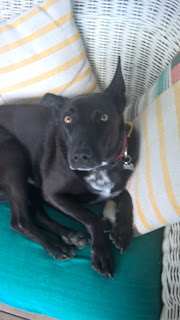 
Well I managed to stay awake long enough to drop the Boy at the airport last night. Lucky for us but not so much for the folk involved, that the smash on the M1 was south bound as we tootled up to Brisvegas. Their tail back was bloody dreadful, about 35km of standstill cars just trying to get home. People slowed for a look see cos they just can't help 'emselves I guess, but otherwise we made good time.

Checking in was a little fraught what with the cheap end of the plane ticket and a weight issue. He took out a jumper and a coat out of his carry on cos it was too heavy and when everything was all squared away we walked around to the bench seating and shoveled it back in. Obviously!

But it is no surprise that we were in a conundrum cos we knew that on the way back the baggage allowance is doubled, and we know this cos we have talked about bringing back a new cooktop as part of his checked baggage.

Anyway he juggled all the paperwork that usually sits in my handie and we settled in for a beer and a toasted sanga. I downed a diet coke to keep me awake, gotta love that caffeine. The sangas were truly shitful, could it really cost so much more to toast BOTH sides of the bloody things? I do wonder why they go out of their way to provide such rubbish food. They just could not possibly be so far in the red by making a proper snack.

While we choked down the food, it became clear that Stevie thought he was sitting in an exit row. I think he was a little shocked to realise just how much of a 'back of the plane' experience he was in for. As I am writing I imagine he will be descending into Abu Dhabi and I hope that it hasn't been too awful. I sent him a text saying that I hoped he was the only snorer on board.

Anyway, once in the Middle East, he is almost 'home', so I reckon he will make it, even if only just.

I said last night that I was very pleased NOT to be getting on the plane, cos it always takes some time and effort to get into a mood ready for flight, and as I wasn't going I hadn't bothered to find that sense of calm, and whilst flying is definitely not his favourite thing to do, Stevie manages it so much better than me, except for the boredom. That I can cope with easily, but it just makes him cross.


I pulled off the road as soon as I left the motorway to wish him a quick painless flight, but I missed the phone turn off by minutes. Bugger!

And then I was home with Dog who had gone a bit nutso as she watched the suitcase being popped into the car. It's a shame she doesn't speak perfect English, cos she just didn't understand when I told her I would be back. I think her abandonment issues rear their ugly head every time she sees a suitcase, poor sausage. She hadn't eaten her dinner and climbed into the car with me as soon as I opened the door for her. Her relief was palpable.

We shared a little yoghurt and watched some shit tellie and then fell exhausted into bed.

Cos her whole evening had been upturned and she hadn't eaten as and when is normal and cos of the anxiety, her system was a bit fucked and in the dark before 4am she let me know that she needed to use the facilities. It's delightfully chilly at that hour, delightful if you are snuggled up in bed, less so if you are wandering downstairs to let the dog out and then standing there wrapped only in a towel, waiting for her to finish up. Sometimes she is really fucking slow.

Back to bed and she decided that it was chilly enough to use me as a hot water bottle, she climbed in and didn't move except to shove me over a little and then a little more, until about 7.30am. Bloody lovely sleep in.

We shared an omelette at Avril's and now she is asleep on the couch, with nary a worry in the world. The radio is loud and I have cleaned and tidied and washed and folded and the usual shit is sorted. I did have to put on my superwoman cape to get the pool sorted cos the wild winds had brought down some palm fronds and shit that had all got wound up in the vacuum thing and it had stopped dead in its tracks, so there was a bit of water sploshed around but I didn't have to get naked and wet, and the debris was collected and ripped and then chucked out. It's purring away like a new one. Shit I am good.

I haven't got many grand plans for my little Boy-free holiday, except to catch up with some girlies and entertain Zig for the hols. He wants to do some cooking. How bad could that be? He doesn't want to use a recipe and he can't cook and wants to do it on his own. Lucky I don't mind waste huh?

Here's hoping that Blighty's arms are wide for the return of her prodigal son.

What do you get up to when you are on your own?