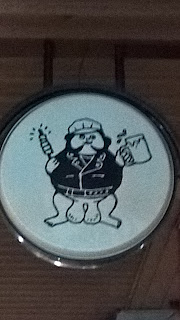 This bloke is doing so well juggling stuff while his nether regions swing close to the ground. Clever fella!


Him Indoors - AKA Stevie, is going back to London for a late birthday jolly, next Monday, and so there is a bit of a list of things that need to be ticked off before he goes. And today has been a ticking off sort of day.

There are 2 pretty big elections while he is away - the referendum about Britain leaving the EU and of course the Aussie National election.

I take voting pretty seriously. I know lots of people whinge cos it's compulsory and that gives 'em the shits, but I reckon if you don't vote then you don't get to whinge about stuff that goes on. No I don't enjoy walking the gauntlet of yokels thrusting paperwork at you, and I have not got much patience for the too often foolish and officious folk who's job it is to tick your name off. But today when we took off and voted in person early what was fun was trying to balance the Senate ballot on the strange little cardboard benches in the second or fifteenth hand voting boxes. The boxes were wonky and the paper long. There was just no way to read the whole of the ballot paper at once....be prepared - it is long! about a metre long. So we had a bit of a giggle about that as we discussed the whos and the whats without any concern that the overseers were gonna frog march us outta there for talking. They were all too busy having a chat with mates and other punters. Yep it is just a big old country market meet up here at the Goldie.

So then off to the Police Station to let 'em know that some girl with a 4 pronged name who had given NSW Police our address when they booked her near Dubbo, doesn't actually live here. She was being booked for not displaying her L plates, so I imagine she was a youngster. What is worrisome is the presumed ease with which she just rolled out our address. The Queensland Police computer could see that her last address was in Victoria and we were told to call the NSW Police, which I did. He really didn't give a shit. He said that I should just post the infringement notice back with an explanation. Ho Hum. At least the Queensland fella had a good look and went and asked his sergeant and looked us in the face as he said he wouldn't worry about it too much.

I am in fact not really worried that we will become embroiled in some sort of criminal activity, but identity fraud is a possibility. I don't expect to answer the gate to a burly drug lords brandishing a knife, but it wouldn't shock me to see someone racking up charges on my AmX account.

Steve worked through the NSW online system and let them know that the girlie doesn't live here and nor has she ever done. This was an extra cross off.

We got gas bottles filled cos in the middle of BBQing the steaks last night, the gas ran out...Isn't that always the way? Why does the bottle not fizzle out just as the steak hits the perfect medium rare?

We grabbed some extra virgin coconut oil from the health food shop. The Bioglan stuff I bought in Adelaide was all sort of lumpy with bits of coconut flesh and not pleasant to slather all over my now crepey skin so I was after some stuff for skin not cooking. People have been looking at me like I am more than a tiny bit crazy when I say I want to wear it not eat it.

And we ventured into a Chemist Warehouse twice where we managed to get some vitamins for Dog from the chemist. Am I the only person how goes into melt down in these shops? The aisles are narrow and the shelves are stacked high, anyway I just can't bare to be in there.

I rang the Vets chasing a quote for some treatments for Dog, and I fired off an email to the Grandie's Head Teacher suggesting that there be some rotation into and out of the composite class.

We mowed the grass and Stevie waved the blower around and has now popped off for the last of his needling before he gets on that plane.

We wound our way through the regulations involved in the British postal votes which arrived in the mail today. Yeh it was simple enough to put an x in the box of choice, but you had to fill in the outside envelope and pop you ballot into it and sticky tape it closed and then tuck the whole lot into another envelop and then you are meant to stick the correct postage on it and cross you fingers that between Oz post and Royal Mail that it gets there in time. We are lucky that Steve is gonna deliver them in person, cos I was not at all sure that faith in those systems would be well placed, so because of Stevie's junket, they will definitely be counted.

The pool water is chemically perfect after Stevie slopped in a bit of acid. Now I just get to enjoy the look of it while he's away. I suppose there is a small chance that Zig will bravely go where I sure am not going to, and if he does the water will not kill him.

And I still had time for a little zzzz off. It's not been hectic but quite productive.

It's impressive how many bits of nonsense you can get done in a day.

And yet that old saying of 'I don't know how I ever had time to work', was true today.

What is the most banal thing you do before you go on holidays?
Posted by Unknown at 17:37