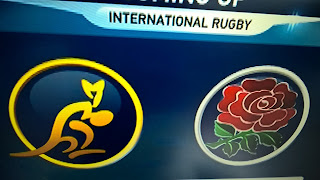 It's THAT time again and the push is on.

Last season we were lucky enough to be at Twickenham for a number of the games and apart from a the dickhead who saw fit to try to intimidate me like he was in the real front row, instead of being some cock with too many beers under his belt, the atmosphere was wonderful. The singing and the good natured banter, and the fact that we could and did walk to and from the stadium all added to a fine experience.

The Poms, under Eddie Jones were out to redeem themselves and the Aussies as ever just wanted to throw the ball around and rub their oppositions' noses in the grime.

We hopped onto a train at Nerang and for no additional cost caught a train all the way into the big smoke. We had a beer with the young fella who stayed with us for a few days a while back and then caught a bus into Suncorp Stadium, where we followed the arrows to our seats even though it meant that we almost circumnavigated the place, Captain Cook would have been so proud. The lift wasn't working so we trooped up a gizillion steps and found our seats.

We were amid a little pommie enclave which was fine.

Then all of a sudden there was this dickhead reving up another dickhead who tried and failed to engage the crowd to sing out 'Fe Fi Fo Fum' ...you know from that highbrow fairy tale, 'Jack and the Beanstalk' Blessed be that they left off 'I can smell the blood of an Englishman' and all this played out over the loud speakers and on the large screens, while the players were doing their warm up yoga on the field.

This chant for want of a better description was just such a lame try-on...England fans sing 'Sweet Chariot' and maybe that doesn't make any good sense either, but it does seem to be effective in channeling the fans' energy and the players willpower.

The Giant's cry was even played out on the bottom of the large screen during the game, presumably to get the crowd involved, except that they were WATCHING THE GAME LIVE cos that's why they paid their money.

So the gee up was a fantastic failure.

I suppose some committee had voted to add some music to the proceedings. They elected some masturbatory DJ who dusted off his collection of old CDs and cued up 10 or 12 seconds of some well known but not necessarily well loved tune and then they played it at high volume any fucking chance they got. Line outs, scrums, penalty kicks, kick offs, injuries, any time there was a brief break in play this thunder of shit music blared out. The same tune was not played, the choices were like those at a shit Karaoke night, you know where everyone picks something they think they might know the words to even if they have no chance of getting the high notes. The songs were not inspirational or energy charging, it seemed like they were chosen by committee from a selection which would not require royalties to be paid.

Well what the very fuck is that all about?

The fella next to us said that the music shit had been included in just about all live sport.

You can hear it a little on the tellie, but it is just so very 'in your face'  or ears at the grounds.

It truly gave me the shits.

I'd have liked a chance to discuss the penalty or the try or what ever but there was no chance of speaking over the din.

The Aussies lost and that was a shame. Stevie would say, 'The Poms won, Yippee!'

We walked out along with a 50000 others. Not all the exits were opened - not even close. What is that about?  Wouldn't you think it wise to let folk out as fast as possible? Why would anyone decided that it would be cool to funnel 50000 people out 2 exits when other exits exisited? Perhaps another committee decision.

We had little choice but to follow the crowd to Milton Rd Station, even though I fancied walking to Roma Street Station.

I managed to avoid a panic attack in the crowds cos Stevie insisted that I keep breathing.

We made the train, and then we ran and made the Goldie train. Yeh I said we RAN. I fucking RAN!

How lucky that we managed to get the express train! It only took us 90 minutes to get back to Nerang. I cannot remember being on a slower train, unless it was the one we caught back from the airport once, which stopped at every fucking station, no, that was not good through the jet lag haze.

I don't understand why the trains go so slowly. Yeh there are level crossings to be wary of, but in between times it just doesn't seem to pick up any speed. The trains seem modern enough and the rails don't seem to be hung together with spit and bobby pins, so why so slow?

Anyway, we arrived home at midnight. 4pm to midnight, now that's a long fucking time for a 80 minutes of rugby.

This morning I made pancakes and strawberries and Stevie got village coffees in and then we watched the game on the tellie.

Much better idea! No fucking music, no stairs, no crowds, no beer down your back, no shitful trains and more than $300 cheaper!

The old Lang Park brings instant smiles to my face, but I will not be back to Suncorp Stadium, at least not until that committee fucks off and someone decides that the punters are capable of entertaining themselves with thoughts of sport during the brief interludes of the game. Seriously someone should mention industrial deafness to that committee....ah maybe that's a good idea. Oh and it'd be cool if someone opened the fucking gates at the end of the game.