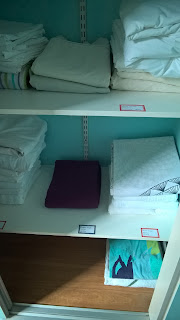 My laziness has been well documented. I will lie down instead of sit, I will sit instead of stand, I will stand and shout instead of walk and talk, I will walk instead of run, except I guess unless there is a fire and then I reckon I could get it moving and watch out if you are between me and the door cos you know how hard it is to stop a bulky object once it gets going. I will stack up shit  in my arms to precarious tottering and tilting, instead of making more than one trip- drives Stevie mad. Yeh stuff has spilt but more often than not I have made it intact and I reckon the welts on my hands from overloaded grocery bags toted from car to kitchen are worth the fewer trips.

I do not like sweating. I go beetroot red in the face, my eyes bug out, and look like I am mid way into a heart attack, long before a bead of sweat appears on my top lip.

Winter came today and the kids are due on Tuesday so I figured that I had best make up some beds and because of the chill that meant DOONAS.

I don't like blankets and that's a shame cos they are a hell-of-a-lot easier to manage, but they are boring and expensive and so I have discovered when I threw a small one in the washing machine and it came out as a felt square good only for a craft project, you can't wash 'em. So doonas - duvets or whatever you call 'em, that's what I have.

We don't need 'em here very often cos of the stinky heat and all, but for the week or so that is winter, it's good to drag 'em out.

There are a variety of TOGs - the Queenslander in me thinks that means something that you wear to the beach, but I have no idea what it really means, some are a good for mumma bear and pappa bear and baby bear too, except that I don't remember what the numbers mean so it's all a bit of luck of the draw. By the time I get it sorted summer will be back and I will just put 'em away to irritate me again next year. Yeh I told you I was lazy.

I have 'em all folded up in various cupboards and some of them are labelled with size and some are just freewheeling. And my linen cupboard is labelled with areas for various sized bedding - single, double, queen and king. Except that the dog sitter last time decided to relieve her boredom by re-organising the whole fucking house, so she re-folded the bedding and then popped it anywhere, so today when I was making up 3 different sized beds, I managed to drag out the wrong sized sheets again and again and only noticed after it was too late for this lazy cow to go back. So I have a double bed with a single top sheet and a king sized doona shoveled into a queen sized cover and 2 queen beds with the right sized sheets but with doonas shoved into the covers with tops to the side and so lumpy would be a reasonable description of how they look. FUCK.

If I was really wealthy I'd would pay someone to pop in everyday with clean beautiful sheets and other bedding and make up the beds. I do very much enjoy a well made bed. I love sliding into clean fresh sheets with just shaved legs - it's one of life's simple fabulous pleasures I reckon.

But I am not much fond of a bed with clumsy corners or less than flat, pulled tight sheets. This means that making the bloody things is a job in itself. Shit!

And to add to the facial glow, I needed to sort out the DOG issue.

She has taken to sleeping on my bed, instead of in her bed. I reckon she is missing her Dad and it might be that she is a little cold so is just slutting up to me for warmth. Anyway I noticed that the coverlet and the light doona had a Dog shaped grubby outline on 'em. So the machine has struggled through both of these today too. Those suckers are heavy when they are wet, so the face was glowing again.

But we are sorted now.

I found a little dark cloth to put on Dog's side of the bed so that maybe she won't smudge up the clean bedding too much, but the up side if she does is that I will be forced into stripping it all off again and maybe next time I will get it all flat and lovely.

Either that or it will be summer.

What is your least favourite domestic chore?