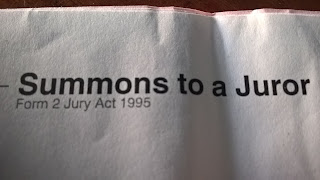 The Green Eyed Monster has taken up residence in the Big House this week, cos Stevie is lucky enough to be a player in a John Grisham scenario. This of course does in no way parallel with his opinion of his week which he might best describe as a bloody nuisance and a waste of good golf weather.

But I am jealous. I would love to be called up to have a turn on a jury, especially if it was some murder or anything that involved CSI investigations.

I don't know how the process works. People who don't want to serve on a jury, seem to get called up with monotonous regularity and I have only ever been lucky once.

I was but a girl, living in Brisvegas and got the NOD letter. I sprinted into the court precinct in George Street and sat around waiting for my turn. I got close to those revered seats once but the 12 lucky sods were already in place before my name was called, so I didn't even have to go through the indignity of walking across the prosecution and defence tables for any sort of scrutiny. That was as close as I got. BUGGER.

So every day Stevie has checked at 5.30pm to see if his number was called for the following day and today was the day. Seriously I nearly choked on that green monster, but I got up and drove him to the Court House.

He doesn't do well with being bored. He can read a book quietly for a couple of hours but then he needs to 'DO' something, so I worried that he might end up on the wrong side of the system if he had to sit for too long. Texts went back and forward and finally I got one that said he was, 'On' Bloody lucky sod.

It was a Rape trial.

The jury selection proceeded pretty much as it does on the tellie or in a legal eagle novel, and unfortunately his name was not picked out of the lotto barrel.

He was dismissed for the day and so I went and picked him up.

It was all over bar the shouting before noon.

He was pleased that the trial was carrying on without him, but I would have been so disappointed, close but no cigar.

He isn't expecting to be called again.

I want to know how I can let the courts know that I want to be called up.

I could sit there for weeks at a time waiting my turn.

I would not hassle them with shit excuses about why I should be excused.

I would not argue with them about getting my transport refunded.

I would listen to evidence carefully.

And then I'd find that old shitting man who raped the young girl, GUILTY. Stinking turd! And if I was on the jury for the fucking swimmer in the States who raped the young woman who was out cold, I would shout 'GUILTY' and  look on incredulously as the Judge sentenced a rapist to just 6 months jail. Maybe that Judge has more in common with the swimmer's shitful father, who thinks rape is a euphemisim for '20 minutes action', because he has no daughters.

Yeh maybe that's why I am not called up.