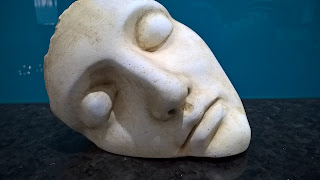 
Drama classrooms are very exciting dynamic places, and I always felt like I was doing a good job, if I had managed to get the kids engaged enough to jump into activities where they pushed the limits - physical and imaginative. The noise of productive busy kids is remarkably different to naughty time wasters and even though sometimes neighbour teachers found it difficult to tell the difference, I could sense when the kids needed to be reined in and when they needed to be left to their own devices.

Well mostly that is. The kids, as teenagers too often do, would push their physical limits and even I had to become a member of the 'elf and safety police, by keeping an eye out and suggesting in the strongest possible terms that Jack put that kid down, and Jill should be very careful waving around that sword. Still accidents sometimes happened. First aid training became quite useful, but if I had a dollar for every time I said put a bit of spit on it and keep going, well you know I might have enough to buy a flash pair of shoes.

I turned a millisecond too late to stop Felicity-fly-through-the-air, from diving off the chair which had become her godly cloud or some such, and she fell in a screaming sobbing heap.

I cleared a space, popped her on her side and spent about a second and a half determining that she had in fact broken her arm. Well shit! That was gonna be some paper work, but that would come later. I sent a kid to get someone from the office to call an Ambo and the lunch bell rang and all the kids filed out.

Felicity was crying. It hurts when you break your arm. I know, it happened to me when I was about her age.

I got her to close her eyes and I started to swirl scratch her back. Slow, large rhythmical curves, and slowly she calmed down. I didn't stop. The tears ebbed and when help arrived, she was dry eyed and ready to answer the medical folks' queries. Her mum landed in the room too, on the verge of hysteria, and was amazed to feel the peace in the room.

When my girl was little and laid up with a dreadful ear infection, which was just far too often for any child to have to bare, that swirling circling could sometimes ease the pain and lull her to sleep while the drugs kicked in. It's still useful today, if she has a migraine.

And yesterday I found myself doing those swirls on my Grandie's back. He arrived home a bit discombulated, as has been sadly a pretty regular occurrence this year, and it was clear that he needed a swirling. AH, yep, calm happened and his smile returned, not right away and perhaps not as big or as bright as had he had a great day, but it was a smile.

I knew things were OK when he noticed the swirling and shrugged me off him and he started chattering about some computer game or other.

No I haven't gone all greenie-yoga-coffee enema to cure cancer crazy, I am just saying that the human connection of the swirls is meditative and pleasant, and just can't do any harm huh?
Posted by Unknown at 15:20