There can be nothing NOMAD about this adventure. 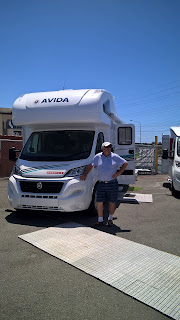 Alright. take a deep breath and sit yourself down and make sure you are hanging onto something solid, cos this is a story, so far out of my comfort zone that I am staggered that I am writing it and not dreaming it.

Today we went and tested out some ...... CAMPERVANS. Yep I said CAMPERVANS.

Stevie has an important birthday next year, not that they aren't ALL important, but next year's is a biggie. When he was 50 he wanted to go to Havana, so that's where I took him. If you haven't been there, I reckon it is worth a good visit. Anyway he liked it so much that he said that for his 60th he'd like to go back and see what changes have occurred, cos it was certainly in flux when we visited.

But as time has ebbed away, he has decided that Cuba might well be able to get along without him and so he has settled on an Outback Adventure. No that doesn't mean a ticket to the Outback Spectacular show at Coomera, it means, oh fuck! going bush!

Darwin to Adelaide or the other way around - it doesn't matter we are flexible, and if you need proof of that flexibility, I am now doing the research so we can hire a CAMPERVAN and go for a little drive for 15 - 20 days.

We went off today to see if the panic attacks might be kept at bay in these mobile tents.

The first one was so small that I had to enter sideways, and still smashed my boobs on the door jam. There was a ladder thing to climb up to the bed over the car cabin thing, but it looked too frail to take me and Stevie didn't fancy it either. The shower sprayed right over the loo, and it was about the size of a medium box of wheatbix. I figured there would be ridiculous spillage into the kitchen and the bedroom and the camp site and half of the Northern Territory if I was ever to have a shower or a shit, cos I sure wouldn't be able to close the door. Even after all these years, I reckon a little mystery is called for, so a closed loo door is now on my necessity list.

There are walloping daddy bear buggers that look like they need executive drivers and really they are not that much bigger inside, than the mumma bear sized ones, but what was pretty speccie was that some of them had sides that pushed out and that gave quite a nice little bit of breathing space. These 'Sliders' are also now on my necessity list.

So it's possible to hire a camper van and do the drive either north south or south north.

And it's possible to hire one that is not gonna cause me to search for a packet of serepax for appalling loo anxiety and one that Stevie is cool to drive.

I have found a couple of itineraries that sound doable and now I just need to get my head around the idea of going bush.

Of course there are some instant advantages, like NO IRONING and basic sort of cooking and seeing stuff that I am sure will be better viewed from the ground that 5km up in the sky, or on the tellie, and there are vast vast areas of OZ that I have never seen.

But there are a couple of things that are still worrying me, not least of which is being more than 5 minutes from a Myer.

On 2 of the days in the itineraries I have found there is a short drive of only 1000 km! That is clearly pretty far, and does that mean that there is just NOTHING along the road and what happens if you run out of petrol or god forbid beer or bubbles. And I wonder if the van things are snake proof, and how long the aircon runs and will there be enough gas for the cooktop and the fridge. And if you have to stay at a camp site, as presumably you do from time to time for electricity and water, do you have to speak to the other folk there?

The whole adventure is just so far out of my comfort zone, but I suppose that's exactly the point of a big birthday bash.

I'd be grateful for any hints about what to do, where to stay, or vehicle hire especially from people who don't believe luxury is a dirty word.