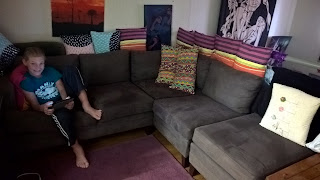 I was evicted once in London. Not cos I had loud mad parties, which I did, and not cos I had  illegally sub-let the extra bedroom which I did. The owner was an arsehole and so too were the agents and it seemed in retrospect that everyone knew that the owner routinely rented out her house while she went on little holidays and would then tip out the tenant long before the lease agreed date and then charge 'em all sorts of shit for cleaning and other shit. Anyway this happened to me and after I got over the lack of honesty, I searched for a house to live in. .

I found a dodgy place, which was lovely and big but in odd condition and there was no furniture but it had a fridge and a huge conservatory out the back. I grabbed it and went hard finding some stuff to fill it from a charity furniture shop not far away. I bought 2 big beds, a side board, a desk, a dining table, assorted chairs, a clothes rail and a truly daggy old couch and had it all delivered for less than 200 quid. Quite the bargain. I loved this house! Between viewing it and moving in, the owner decided to nail closed the strange bathroom door, but that of course was no barrier for a determined Aussie girl and I pried it open and got in a plumber, put up some miss-matched tiles on the walls and reveled in my shower room. This was just how the strange house and I got along.

The couch was a disaster. It was in reasonable order, except that the pink upholstery was faded and more than a little sad.

I needed to put all this shit into storage, and my darling Ally stepped up and said I could stack all my crap in her back shed. Carol and Matty and I spent a day moving it all in and we were truly pooped when we discovered at the end of the day, that the couch wouldn't fit through the front door. Shit! We turned it, mostly 'rude side' in, and pushed it against the front of her house which was only metres from the footpath, and thought we'd worry about it the following day.

Our surprise the next day to find it gone, can only have been surpassed by the thieves' shock to see the aritistic endeavours when they got the couch into the light!

Perhaps they liked it and kept it,  cos it certainly didn't ever reappear on the streets close by.

But who just walks along a suburban street and sees an unattended couch and just decides to go and collect it and walk it away? I mean who does that? You can't just tuck it into your handie after all.

Well oddly enough it's not as uncommon as you might think, cos this week Stevie and I delivered a new couch to my girlie as an early christmas present. In preparation she had moved her old one downstairs into the open car parking spot. It was a beaten up green fella that was dented and broken and had been held up by bricks and things in her flat.

Last night, someone came in and stole it!

A whole fucking couch! 2 big broken pieces and assorted large cushions! Someone or some people just wandered in in the middle of the night and walked off with all this stuff, and that in itself was ridiculous cos if they had just knocked on her door and asked about it, she would probably have given it away with an offer to help 'em move it.

Who steals a couch?