Refugees and our home grown homeless 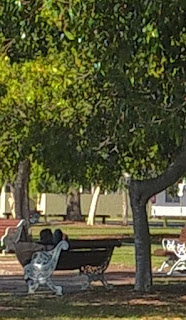 Daryl in the park.


Seems there was some new drama with the off shore detention of folk who were wanting to bypass the usual immigration requirements into Australia and there has been a bit of a social media storm about it. Now I have long been worried about the lack of humanity in shoving folk into sort of jails instead of either letting 'em into Australia, or drowning in the ocean.

Treating any person badly doesn't sit well with me.

I don't pretend to be an authority on the off shore detention facilities.

I can't imagine what circumstances would push you out of your home to trek thousands of kilometres to get on a leaky boat bound for fuck knows where, but it must have been pretty severe.

But I also know that there is a finite amount of our money that the government has to spend on stuff, and by opening up flood gates to the whole world's refugees just surely is not economically viable.

So I don't know what the solution is.

And I was similarly conflicted this week about helping Daryl, the homeless fellow in the park next door.

Years ago when I was living in London, there were lots of homeless folk and there were often stories about different individuals who were sort of adopted by locals and histories and preferences were sometimes discussed on local forums. Yeh the homeless folk agreed they needed help and when someone gave them cash or a meal they were grateful, but best of all they reckoned was when people stopped by for a chat - some direct eye contact, some human interaction.

It has always seemed like little enough to offer someone down on their luck.

So apart from feeding Daryl this week and making sure he was warm enough - hard to believe in this heat I know, but he said he was cold at night, so an old doona and a jumper made their way to him, we have shared a cuppa in the mornings, along with a bit of banter. I don't know who else stops to chat, but I hope some folk do.

A fella from the local homeless shelter charity place popped out to Daryl and told him about places he could go for food and showers etc, but there was no offer of accommodation. I spoke to the charity worker who made it very clear to me that I was doing a bad thing feeding Daryl, cos while I was helping him, he would not help himself.

Now I thought about this for a good few hours, and could easily see the logic in it. But as I looked over the fence at the skinny little lump of a man who had moved only to walk to the loo and to return my tea mug, I just didn't feel that the worker was right.

Sure, Daryl could have possibly schlepped 3 kms to and from the meal place and he could have filled up on food. But to do that he would have needed either $2 or explain why he didn't have $2. He would have had to stand in line with other fellas who may or may not have been recently friendly with soap and would have had to sit across from fellas who probably were a mirror of himself while they ate. And while he was filling up his worldly possessions would have been left unattended stashed behind a fence in the park.

He told me early last week that he'd be moving on next Tuesday, so perhaps because there is an end game, I have happily fed him up. It doesn't seem like a lot do for 'my new boyfriend' as Stevie calls him.

What I have NOT done is invite him into the house...Early on Stevie put his foot down just in case I was thinking about it, cos he knows I am a bit of a soft touch. Yeh we could afford to accommodate him and we certainly have the room, but we didn't invite him in. Yeh I do feel a little guilty - the disparity and all, but I did not invite him in. His story is his story and even though The System is slow and inefficient and loaded against him, there is permanent help available if he chooses to jump through the hoops. He knows what needs to be done and he needs to choose that path. Until then I guess he moves from one place to another, and I hope that someone else will keep an eye out for him in his next location.

So I didn't offer a new life or a new home or a new start. This has all been a temporary fix, and I guess that's what's going at Nauru and PNG.