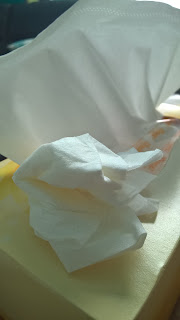 There is nothing quite like the oooze of green slime shit from your nose to make you feel sorry for yourself huh?

Bugger it all, I am almost never ill. Oh sure I have been laid flat by some kid born lurgy but even that has been blessedly a rarity.

My first Christmas in London was one of those times. I suppose there must be quite a lot of truth in the idea that you get used to your own germs. You know, you sort of become immuned to your students' air born diseases and your partner's bugs and your own kids' grubby ways. But after 3 months in a Pommie classroom with all manner of foreign germies, both my girl and I were completely and absolutely bollocksed.

And our Christmas day was more memorable for it.

It was such a disaster. A mate and his young fella came for a slap up lunch a la the Aussie way - turkey, ham, prawns and all the trimmings, but the cultural exchange and the germs got to me and the poor little fella ate up some prawns and that was it, cos the pommie ham as it turned out needed to be boiled to within an inch of it's life to get rid of the salt, instead I baked it with brown sugar and cloves as I have done for eons. It was utterly inedible! and the turkey was RAW.

Belly and I tried to pull it together to play a bit of a game of footy with the kid but we ended up in lumps on the lounge room floor and we stayed there for three days. Now THAT was unwell!

I have never been so ill!

So when the tap in my nose turns on, I always compare it to that time.

Today my throat is sore and talking is tricky and I am using the tissues to mop up the slime.

The whole problem is in my head, literally, unlike my London lurgy when even blinking made me cry, and I ached from about 2 inched passed the end of my toes to the top of my hat.

It makes me understand why there are different strains of the flu jab. A bug that might snip away at an Aussie at home could well be the cause of a foreigner popping their clogs. So whatever they shove in the flu jab here is more than likely different to other places.

SO here's my cure for the sniffles.

Do NOTHING.
Go NOWHERE.
Take whatever drugs you have in the house, asprin, panadol, antihistamines, nose squirt stuff - not cocaine, although whatever gets you through the night I reckon.
Drink plenty of tea.
Laze around the house like Cleopatra, but give the peeled grapes a miss, cos they are a bit stingy on the throat.
Sleep where and when you can and go to bed with a book, cos it's always the way, that the worst happens at night in the dark - fuck it, I don't know why that's the case. Maybe it's so that the kids don't get all confused and mistake you for Rudolf the Red Nosed twat.

The lurgy's here, but I don't expect it to visit for long, unless of course Stevie gets it and then kindly hands it back to me.