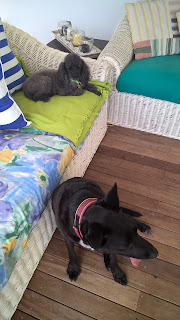 I am out of practice that's for sure!

Used to be that I could be in charge of 30 little tear-aways and they would mostly do as I asked. I remember one auspicious occasion when I had a migraine and lay on the floor periodically throwing up into a waste basket and still the kids were on task. Or at least they were pretending to be cos they didn't want to have to come and sit by me and my bucket.

Of course it takes time and patience, some skill and often a gentle threat to call in parentals,  to get to this point.

We are babysitting George for a few days while his mum is off getting a tune up.

The 2 dogs have been rubbing along well enough in the park for years and so it was always gonna be ok, but what I hadn't banked on was how much hard work it is having 2 of anything. They have different eating regimes and and Georgie is docile and polite and Dog is just a bloody hoover, so this morning I worked out that I had to feed Georgie in the garage with the door closed and then I had to find a little treat for Dog cos she doesn't usually eat in the mornings but jealousy might well have seen her eat Georgie for a snack if she thought he was getting more than she was. And last night Dog was not happy about Georgie being on my chair cos after all I am HER mum and he can just bugger off. Things settled when Stevie took Georgie onto his chair and I got onto the couch with Dog. It's not too much of a problem, really it's not. It just takes thinking about and that brain activity is out of my norm.

So I have been wondering how people manage multiples; bed partners, children, pets, jobs, appointments. More than one anything really.

There was a story doing the rounds when I was but a girl, that my aunt would disappear regularly and routinely arrive home in time to pop out another cousin. This could of course have been only a rumour. The household was always pretty chaotic with comings and goings and if I am honest I still am not sure just how many cousins I aught to be sending chrissie cards to. But I suppose that would be one way to cope, mix it all up like an Eton Mess and see how things turned out. There must be plenty of space to hide the odd bugger up amid the craziness.

I am lazy and a bad bad liar so an affair has always been out of the question, but I did think about having a second baby when my girl was about 2 or 3. It didn't happen and I was at the time disappointed but then when we made our solo way in the world I was pleased that there was only the 2 of us. I am in awe of folk who manage more than one, cos I reckon one of anything is enough unless it's chocolate or slices of cheesecake.

I can imagine if I had a herd of my own kids I would have learnt some coping mechanisms like giving them all numbers and having them 'sound-off' a la the Von Trapps from The Sound of Music. While at Woolies I can see and hear 'em all chanting away, or the pictures or the beach, or where ever we went. I would have been nuts with fear of losing one or more than one of the little blighters, but maybe when you have a herd it's OK if you lose one or two?

'One is the loneliest number that you ever knew' Yeh I am singing badly and the dogs are looking at me like I am some kind of maniac but how can I think of the John Farnham lyric without bursting into my tuneless refrain. But ONE is often more than enough. One fella, one kid, one dog, one car, one house, one disease, one argument, one thought, one job, one wish. Oh I just remembered that I have a pond full of fish, but really one would be lonely and in truth I have only ever bothered to give one of 'the girls' a name. Go Bertha!

This might be the limit of time away from the dogs.

I had best get out there and see what they are up to.

Hope that Dog has not eaten Georgie for morning tea.