Kindles - Have you got one? 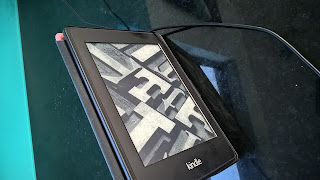 I read a lot, in the bath, waiting for a movie, chowing down on a scone and coffee afternoon tea, in bed, on public transport - well for full disclosure I should say on planes cos I am not enough of a public transport traveler for it to be a significant reading time. The buses here on the Goldie are irregular at best and too bloody expensive, and even though I do like the trams here, they aren't useful except for being a little joy ride. If I was in Brisvegas I would use the ferries all the time, but then that is just a fab way of getting around that I would be too busy looking around to want to dive into a book.

I like biographies and autobiographies, even though there is a problem with how the photos translate on the Kindle. I like mysteries and comedies and legal eagle stories, and just on that topic I am very pleased to have caught up on the whole story of 'Suits' and am now waiting to watch each update on a thursday evening. It's been around for quite a time and I am pleased that I have now a convert.

Usually the Kindle is perfect. It slides inconspicuously into my handie and it weighs less than a paper back. It comes with it's own back lighting so you can just close it up when you are done for the night instead of having to struggle up to turn off the light, and if you are feeling really truly lazy you can wedge it open and just fling a finger at it to turn a page. It certainly does not require breaking a sweat in these stinking evenings. Ordering books is simple and instant and sometimes I am cheeky and go into a bookstore and have a good look around and text myself the names of books that grab me and then go home and order 'em.

The trouble is that A. sometimes there is fine print which should be read, but which I never ever bother with, especially if I think I am getting a bargain, like a book is a big old freebie! If it sounds good and it's not gonna require a card swipe, well what's not to love? and B. Sometimes the format of the hard copy book is not even close to translated on the Kindle.

My latest book just finished and enjoyed well enough, suffered both A and B.

I snavelled it up for nothing and read it like a demon, even though understanding was complicated by time and place jumping with no notice. There were lots of characters and complications and all too often I had read a couple of paras before I cottoned that the last bit was the last bit and this was the new bit and then had to go back a couple of paras to get the idea. I am not sure why some sort of spacing wasn't possible, I imagine that a hard copy would have signified these changes by some scroll marking or a new page, and if I had stopped every time and wrote to the publisher about the typos and grammatical errors, I would still be reading the first part of the story.

Yeh that was the second problem. The story was chopped in half and if I wanted to find out how it ended, I had to buy part 2. I was not happy being held for ransom. I would have happily paid for the whole thing. When I read the synopsis it grabbed me and I would have had it. But I thought about it for a couple of days before I bit the bullet, because of the shitty format and the errors and because of the trickery.

I didn't see anything about the first bit being only a bit - well half really, but it might have been there in the fine print.

'The Second Amendment' by John Matthews is a thinly disguised discussion about how to change the Gun Laws in the USA. It's full of characters - both shady and and ruthless and smart and patriotic and it refers to what I imagine are actual Constitutional dilemmas. 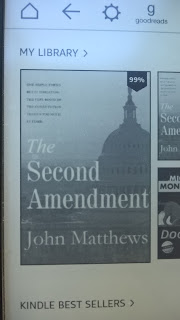 Yes I would recommend this book but perhaps it might be better to borrow it from a Library - yeh what an old fashioned idea, or maybe buy it from a second handie if you stumble over it, cos I don't think it translates well on Kindle.