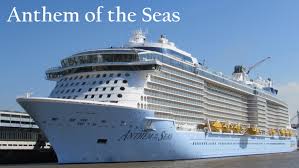 In the news today was a story about a walloping cruise ship which got damaged in a storm and had to head back to port. I am not wanting to discourage punters from going for a ride, but who went on this ANYWAY? - more than 4000 paying customers and 1500 staff, that's who, all braver than me.

I mean it just doesn't look stable to me. It's too tall and skinny. I reckon really tall skinny people are far more likely to be blown over in the wind, and tall trees are likely to blow over and bend til they break, so even with my great respect for all things sciencey, I am just not surprised that the storm worried this giant fella, or is it grand dame, cos boats are always girlies?

I look at it and first I wonder about going on holiday with that many people. I mean that's the population of a good sized Queensland town and I sure as shit don't reckon too many of them country folk would want to pack up the whole town and take 'em on an adventure, cos there must be one or two nutters in the town, one or two people who never shower, one or two people who always win on the Keno and really rub it in. But my biggest problem would be that there would be a very large number of those folk who would be faster than me to the lifeboats. I would be left for dead, literally.

And I am afraid of drowning.

There are lots of really truly awful ways to die. You could choke on a Lego block, or sit on an exploding cushion, or swallow a poisonous berry, or have one of those Amazonian parasitic fish swim up your urine stream and make house in your winkle, but worrying about drowning is the thing that keeps me up at night. The terror, the isolation, the sharks, the moment of recognising the inevitable, the very real fear I have of enclosed spaces and let's face it that ocean is a pretty big enclosed space. Oh please let me get hit by a bus, well not tomorrow you understand and perhaps not literally, but I'm sure you get the idea, I just really don't want to drown.

I watched 'Titanic' in a bar in Bali. The first night I was late and the movie was half way through. I watched anyway, even though I had missed the start and I am afraid of drowning. The next night I arrived early enough to see the start of the movie. Yeh it's an odd way to watch a movie but I was on holiday and pretty chilled. So I ordered a beer and felt pleased that I was watching what the whole world seemed to have already seen. But when the engineer / designer bloke lied about the number of lifeboats I really wanted to get out of my seat and punch him in the head. Even though realistically there would be no way of evacuating all the people quickly enough if the sodding boat was sinking. I wanted everyone to have a fighting chance.

And on this walloper boat that was troubled by wind this week - no it wasn't farting, I am just trying to underplay the storm, I can only imagine, even though I don't want to, the scramble and chaos of trying to evacuate 5000 people. There would be a mountain of bodies that would need to be climbed over before there was even a slim chance of scooting onto a lifie. Yeh that would be my choice I reckon. Bugger that Leo sinking feeling, please let me be crushed to death by people trying to avoid drowning.
Posted by Unknown at 09:07