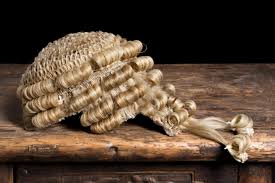 My hair is in need of a bit of TLC cos the re-growth has appeared, and the Pommie water is playing havoc with the condition, so up or down or round and round it all too often is looking pretty shit, but when I popped into The Old Bailey to have a little look see at some court proceedings, I took solace cos one of the QC wigs was in such an appalling state that it made my mane look positively luxuriant

The Old Bailey has long been on my 'To-Do' List for London. So I took off and a bus ride and 3 tube connections later I walked up to this dark little alley and followed the signs to the public gallery. There are a lot of rules to be adhered to before you can go in, but the major one is NO PHONES. Well that's a bugger, cos who goes anywhere without their phones these days?

But as luck or fine enterprise would have it, down the rickety stairs and around the corner there is Capable Travel, who for a small sum will mind your shit for the day. I gave 'em a pound and my phone and then read the small print and then realised that my kindle probably was illegal too so because of the wrong order of delivery I needed to pay another fiver, but ho hum and there was no entry charge at the courts, so all up it was gonna be a cheap day's entertainment. I kept hold of my 2 raffle tickets and wondered if the tax man had been let into this little venture, or if the Looker-afterer CEO might at sometime in the future end up exactly where I was heading.

So back up the rickety dark stairs to face the security department located on the narrow stairs' half landing, where the young fella opened every zipper of my handie and felt it up like it was a girlie prisoner before her first shower. His offsider let me through the metal detector and of course it buzzed like a bitch and then he went over me with his beeping wand and eventually I had to lift my skirt and show him the metal knee scars. No it wasn't as exciting as it sounds and I was left fondly reminiscing about the security fella in Cairns whose feel-up search was far more romantic.

But then I was IN. I didn't know what was showing so I took pot luck. Court 16 was a murder trial.

The Jury was sitting there and it must have been early days cos there was a lot of explaining about times and technology related to the CCTV footage which was gonna form the crux of the evidence. From my lofty spot in the gallery, with no knowledge of the Law and not having heard all the evidence or a word from the defence, I would imagine that these 3 fellas could very well swing. However, evidence aside, I was also struck by just how little privacy any of us really have. The footage was a compilation of private CCTV and Council CCTV and Main roads CCTV and shops and traffic lights and Train station footage. The Jury was presented with and almost second to second visual of the fellas leading up to the crime. How could there be any doubt?

I'm not too concerned with this Big Brother invasion into our lives, though maybe that's cos I am naïve, or maybe it's cos I am, generally speaking law abiding and do not live in fear of 'being found out'. Instead I am pleased that such technology can be used to lock up the baddies and maybe even act as a deterrent.

The equipment overheated and so a little recess was called and I popped into another court.

Here there was no Jury. The battle was on for whether or not some evidence should be shown to the Jury when it was selected. It seemed a bit more casual. At one point I laughed out loud. I discovered that it was NOT that casual, the Judge's cross and somewhat surprised look was a timely education.

Some newspaper bloke had been charged with Conspiracy to Commit Misconduct in Public Office and I understand the case is about money that had been paid to coppers and prison officers in cash for information that had made it's way into the hands of various journalists and subsequently into Newspaper stories. I thought the proceedings were interesting even if the issues seemed not too important to me.

The prosecutor's wig was in the most appalling state. There is I think supposed to be 3 rows of curls and 2 funny little piggy tails hanging down the back, but his looked like it had been  through the heavy duty cycle of an industrial washer and then dried in a wind tunnel. Maybe 'them what's in the public service', are just so badly paid that they share the wee wigs and to avoid the transference of nits, they always give 'em a good old shake out before donning 'em, but whatever had happened to this poor thing I can only say that it's time for  a new one. The defence fella was sartorially elegant even if he appeared a little Rumpole of the Bailey squiffy, if you know what I mean.

If there is ever a Legal Eagle thing on the tellie or in a movie or a Grisham novel, then I am in. I love 'em. I love the puzzle solving and the argument making, although it must be said that justice moves far more quickly on the large or small screens than it does in real life.

I will be pleased to go back another day for another look.