The Start of My Little Holiday. 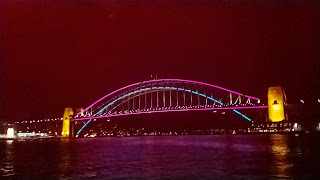 It's no secret that I travel BADLY. The whole getting somewhere by plane just doesn't do it for me, but apart from the tall young bloke who from his own account was a statistic wiz for the NRL, who waved his arms around, too often in my face and spoke barely taking breath in a loud whiney voice ( explains why he's not on radio or the tellie) for the WHOLE trip, and the bloke across the aisle from me who got on ordered a couple of beers cos 'It's got to be dark somewhere in the world', who was like a jack in the box, getting up to check his precious cargo and bending over, so exposing his bare hairy stinky arse to the world and more importantly sticking it right in my face, well apart for this bit of irritation the trip to Sydney was fine.

It was a jeans a sneakers and layers and my big old blanket scarf thing night last night. Yep it was chilly. Off the VIVID and the lights are just so lovely. 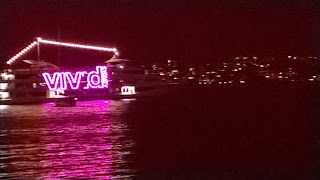 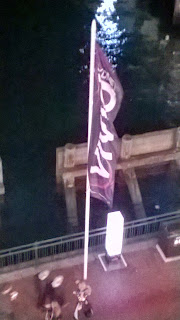 Circular Quay was as ever completely heaving with people, and we manoeuvred our way to the southern end and up the tall lift onto the Cahill Expressway which runs above the railway and we had a real good nosey around. There were fewer people there, mostly serious photographers like Carol, toting their camera gear and setting up for the perfect shots. The view to the Opera House and The MCA ( Museum of Contemporary Art) is excellent from up here - Just a local's tip. The lighting loop on the Opera House is pretty good, but it's a bit too 'cartoony' for me and doesn't take full advantage of the iconic sails shape, but the MCA display is just bloody fantastic. When you stand a just watch, you can 'fall' into it. The building grows and changes size and it's just fabulous. We ate at the Neptune's Palace - a great mixture of Chinese and Malaysian food and apart from being outrageously rude to some poor bloke with one of those voice box on his throat thing which lacked any sort of clarity of sound to the point where as I couldn't see him, forced me to shout out above the din, 'What is that fucking noise?' Carol crawled up her own bum as she was looking straight at him and madly pointed to her throat and quickly did a Marcel Marceau. Shit I had just loudly offended him, but not on purpose, and I reckon I might have identified a possible new invention for the Shark Tank. Anyway the food was good and fuelled us for the next big adventure. We were off to jump on the boat for a harbour cruise taking in all the Vivid lights. 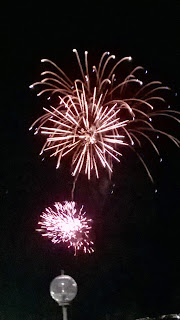 The very best part of the 'Cruise' was the cracker display which we caught by sheer serendipity before we boarded.
I had found the tickets on one of the coupon sites and after some negotiation we decided that we might be able to manage to enjoy it. Well WE WERE WRONG!

DO NOT GO ON THE GOODTIME BOAT. 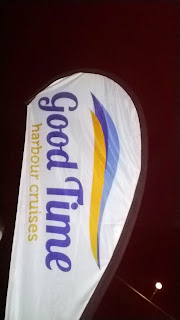 The shitting thing left late which Carol said was pretty normal for Sydney, and was full of rude pissed bogans who were keen to stand right in front of us and hoover up their stinking food and down more cheap grog. We had secured our spots and were taking not prisoners. A couple of people tried to stand in our way, and I had to get rude, but not as rude as the woman next to us who got up and grabbed 'em and walked them to the front of the boat, all the while telling them about manners in Australia.

Anyway it became obvious early on that the lights were gonna come a very poor last to the shit food and grog and the dooosh dooosh disco going on inside.

The boat didn't come within cooee of any of the lights and just rocked up and around on the harbour which could have been all very wonderful except for the fucking noise and the people.

We should have known better! and never again!