Phones - Then and Now 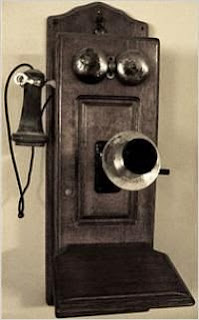 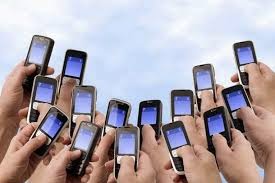 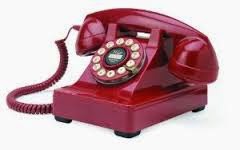 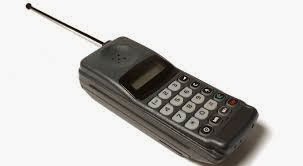 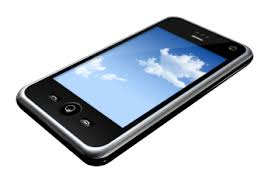 My Nanna had a big old clunky bakolite black phone like the red one here and it was seriously so heavy that you could knock out a small child and their au pair, if you were strong enough to be able to pick it up and swing it around. It was always a real moment of excitement if it rang and she let me answer it. That of course was only after a great deal of teaching and trying and role playing and yes, still getting it wrong occasionally and then she'd patiently start again. She was a good lady my Nanna.
Then she moved into the then current times and got a bright bloody green plastic thing which just wasn't as exciting. We had a white one I think at home. This was back in the day when dinosaurs roamed free and the cost of phone calls was pretty steep. And every call was identified on the bill and the accountant in my Dad saw him fine tooth comb that bill and go spastic about all the 'unauthorised' calls that we kids had snuck in while the parentals were out. We'd sit there and deny all knowledge of most of the calls, only fessing up to a few. He tried everything bless him, to keep a rein on the bill but with 5 people in the household, it got tricky. He set up a grid, where you just had to put a tick in the box if you called someone and when that proved ineffectual, he tried to insist that we all record every single phone number we called. I don't think he cared too much about the total on the bill, he just really wanted to be able to check that it was correct. Anyway, finally his irritation led him to putting a pad-lock on the phone! I reckon ours might well have been the only phone in the neighbourhood with this accessory. The phone bill of course dropped considerably once our usage was prevented and after that he figured that Telecom were probably getting it pretty right.
It was a simple, innocent, safe time really. If we wanted to call someone we'd do it within earshot of the whole family. There was no privacy or secrecy. Sometimes if I wanted to speak 'silly' to a boyfriend then a code was needed and that naturally had to be devised in advance. Phone dating - James Bond style - well hardly.
And so we take the giant leap to smart phones in public places with you tube videos playing at full volume and conference calls on speaker.
It makes me feel old to whinge about it.
I certainly have no interest in chasing down one of Nanna's old style phones but surely there could be some sort of happy medium.
I don't want others to hear my conversations, either live or via the ether, and I sure as shit don't want to hear someone else's tired old crap.
I reckon there should be a rule, if you are gonna use your phone in such a way that everyone within a 30 metre radius can hear it, then it must be shocking or entertaining or life changingly informative. If it is just gonna be that shitful tinny poor quality whine of the sound of someone stupid falling over something ridiculous, or a 3 way conversation about the price of disposable nappies, then for god sake go out into the park or the privacy of your own place so as to not inflict that level of wrist slitting, brain fogging mundanity  on the rest of us.
Oh shit I really am a grumpy old woman.  ﻿