From Street Art to Fine Art, it aint a big leap. 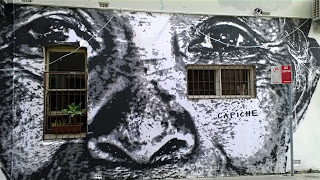 This piece is paper pasted onto the wall. It falls into almost immediate decay.


'What is one man's junk is another man's treasure.'

No I haven't been checking out the Sydney humpity bumps - dumps, although I am tempted to think that they would be pretty exciting too cause there is nothing in this city NOT to like.

Yesterday was an Arty Day.

We started early - well ok that's a lie, but we began our adventure with wonderful dumplings at  North Sydney's Din Tai Fung and then we were off. 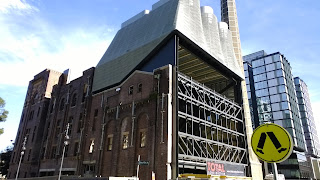 This was an old Brewery and the renewal looks interesting. I like that the new bits are not remotely in sync with the old and that the old still stands proud. The brick work especially around the arched windows would melt the heart of an old London builder - eh Stevie?
Chippendales is a sort of new suburb, just an easy stroll from Central Station. The whole area is dragging itself through urban renewal and so there is a wonderful mixture of fixed, repaired, replaced, and bloody wonderful looking falling down. Some of the replaced is in my opinion rather less than successful, too austere and some of it really lacks any sense of fine aesthetic. I realise that compact housing needs to be cheap, but that surely does not necessitate ugly. There's a variety of vertical gardens on very grand scales up the sides of very tall buildings and they look OK from a distance, but as is often the case with gardens they look pretty scrappy up close and I watched the watering system on one of them pour gallons of water straight off onto the footpath. Communal maintenance over many floors must be a Body Corporate nightmare. 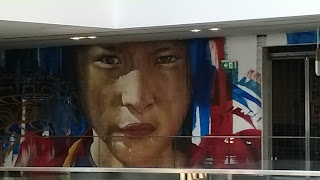 The Gallery space at The Living Mall at Central Park was much more successful than last when I was there last year. It seems established and operational rather than just an idea. A Street Wear exhibition was coming together and an Aussie Street artist Matt Adnate had painted 3 huge portraits on the walls outside. Brilliant to look at from a distance - well one of them I found a little disturbing and then wonderful to have a look at up close and personal as I tried albeit unsuccessfully to work out how he had painted it.

There was some spray can action of course but also brush work and scraping and sponging too I think. The hurried 'let it dribble' bits are quite possibly my favourite. 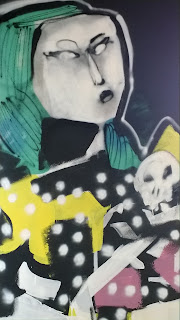 Anthony Lister's pieces, I think this were my favourite  for the day.  He painted them behind and around the  pillars in a the lecture room next to the gallery. 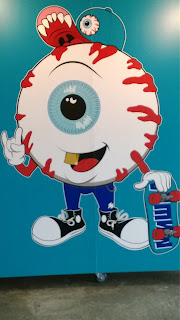 Some huge prints celebrating the Street Wear display were being arranged. This one reminded me of Zig.


There is a great deal of talent in these Street Artists. There is obvious planning of the piece and I believe that there is often preliminary sketches, but still the work is done quickly, and the spontaneity is what really draws me in. I have worked for weeks and weeks on canvases that ended up looking like shit and these folk spend perhaps a couple of days and the end product is just bloody brilliant. The given of course is that they are just very much better artists than me - I am only a hack, but there is quite an art to speed art work and I would love to be able to produce - not these images - my images but with this speed and precision. Maybe if I could I could be the first fat old woman on a scaffold or a ladder painting up a storm and running from the police.

We found 'White Rabbit' gallery which was closed last year. This place takes you from whimsy to the dark side over 4 floors. I suggest if you have kids that you call it a day after the 3 floor, and perhaps even the second. Some of the stuff is not for the pearls and hairnet brigade. We looked and watched and played and wondered and photographed and laughed. Bloody brilliant place! 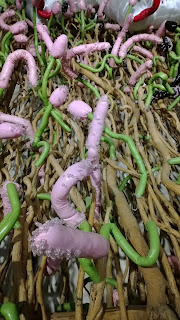 This is the Penis Garden - no it wasn't on the ground floor.
Then we trolled through the backstreets looking for new Street Art pieces. Carol knows her onions and can identify artists just by their style and had wonderful stories about meet and greets and details which only add to the art. I should suggest that she runs some tours, but be warned you'd need comfortable shoes, a hardy disposition and the capacity to traverse 4 lanes of fast moving traffic without fear. 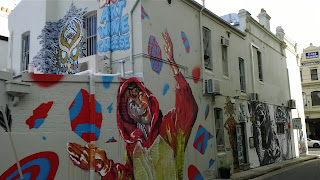 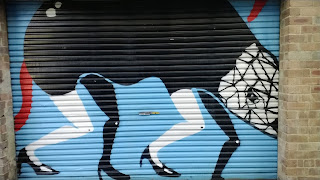 
She had spent time looking for 'The Block' at Redfern and I am pleased to say that we found it together yesterday, well actually Carol found it, I just trooped along some metres behind and was pleased for the respite. The tiny 2up/2down terrace houses presented in varying degrees of decay and I find them very romantic. 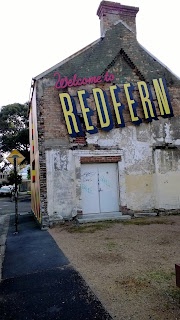 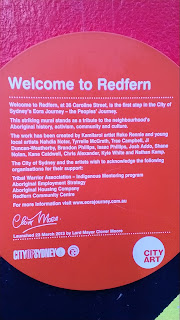 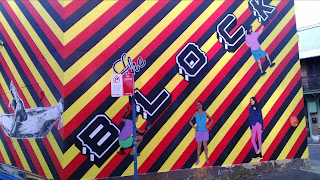 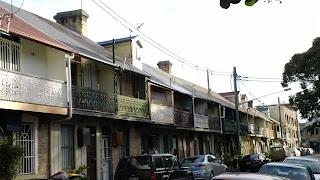 Off to town for the Matt Adnate exhibition. He has painted maybe a dozen large canvases predominantly of Aboriginal children. His style was easily recognisable, and his work translates simply from the street to the gallery. It was all but sold out, and so the story goes, he is now off to Tibet to spend his loot on his next project. I can only wish him great success.

There was a somewhat homeless bloke in the mall doing a tapestry roll style piece in BIRO. His work too was very interesting and whilst his plans were simpler than jetting off, he seemed to have it sussed and excuse the pun, was on a roll. If you are in the mall, stop by and have a chat, and a look at his tribute to the ANZACs which is the topic of his current piece.

We staggered home with feet hurting so much that our eyes were almost leaking and best laid plans of Vivid lights after the kids go to be bed, were dashed in lieu of PJs and the footy. Yeh Queenslanders!!