Back a few years ago, when my face was less creased and I had my own knees, our side wall / fence fell down with a little help of age, collision, and invasive tree roots. This is according to the Ombudsman who oversaw our complaint with our insurance company.

As any good neighbours, we first approached the Gold Coast City Council cos the damage was caused by their boy racer mowers and their tree roots. 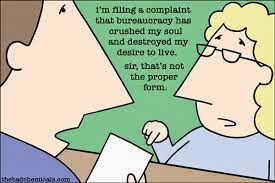 We tooed and froed for a while and the stone walling ( excuse the pun ) and outright lies were all too much for me so we sought help from our insurance people. Initially they were fine. They lined up engineers and quotes and then I suppose they fell off their collective chairs at the price and  decided to make things difficult. We finally had a little win.

But bugger me if the tree roots are attacking the fence AGAIN. The boy racers have played dodgems too and I am worried that the whole bloody thing is gonna topple AGAIN. I wasn't too worried cos 2 different Arborists from the council had been out tree inspecting and looping and had had a look and said that a ROOT BARRIER was needed and they would sort it. Well yippee!

After yesterday's call, a bunch of blokes arrived while I was in Brisvegas and told Steve to pick which 20 metres of the fence we wanted to protect. They would not be doing the full fence line and they would not be putting in a barrier, they would just be severing the roots. This would be good enough for a little while. Steve rang me and whilst deciding which bit of wall we are most fond of seemed like a ludicrous thing to do, we pick our favourite bit and they marked it out with some fetching green paint that went not so well with the blue / grey wall paint and then they buggered off promising to be back today at 7am for a good go at it.

Well you have to know that the only person up and dressed and watered at 7am was ME. I waited til 9am to ring. I was on the phone for more than 30 minutes. I was not polite, but because I did not swear they did not end the call.

I was told that if my fence fell over because of the tree roots, then I could claim against the Council's insurance and as that was the lie bandied about last time, I could do little more than wave my arms around like a maniac and laugh derisively. I begged her to make sure that the call was being recorded.

And bugger me, the actual Arborist, well that's what he said anyway, rang me back and promised that:

.The whole fence line would be protected
.A barrier would be installed
.The work would be done tomorrow
.There would be no damage to the wall footings

I am waiting and seeing.

Tomorrow is another day.
Posted by Unknown at 16:53