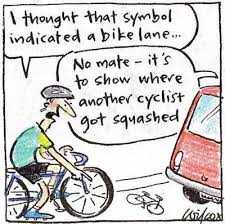 \
There's the serene music and the calm friendly faces and 2 bikers riding side by side chatting away joyfully, until they become aware of a motorist behind them so they graciously move into single file so the car can more easily get passed them. The voice over waxes lyrical about how kind the bikers are and how this bit of generosity is all that it takes for peace and goodwill to spread on our roads like butter on hot toast.

The high angle shot which follows show the car going passed the 2 bikers, crossing the solid white line, and running the risk of smashing into anyone using the other side of the road - motorist, biker / or pedestrians.

I am pretty drug fazed at present but isn't crossing a solid white line against the law?

Should we be pleased that the good natured bikers have allowed sufficient room for a motorist to put themselves and others at risk?

What in deed were the AD MEN (women) thinking?

There can just be no doubt that there are many many roads that just cannot accommodate parked cars 2 way car traffic and bicycles, let alone dogs and neighbourhood kids playing a game of French Cricket. The roads are just too bloody narrow, and intricately worded legislation about when you can and can't pass and all the rest of it is just not gonna be helpful.

I don't ride a bike anymore, haven't done for many years. It used to be a way of getting from A to B when my car was wonky or if I wanted some exercise. I might have stopped about the same time as it became law to wear a bloody helmet - oh how I loved it when the government decided to interfere in my delight in wind blown hair down by the Brisbane Corso on a sunday afternoon.

Bikers today seem to believe they are vehicle almight, that they are playing a great role in  curing global warming and are keen to push their greenie credentials and lyrca down the throats of the heathen fossil fuel slurping comfort seekers driving around in metal versions of their lounge rooms.

I can't see a time of easy co-existence between cars and bikes. I would like to say that there might come a time when common sense prevailed and people were as aware as they could be but I reckon that's doubtful.

The more legislation that is drawn up and can be waved around on high by biker bullies, then the worse off I fear they will be.

It's hard to hide behind the law that says you can ride 2 abreast and that cars need to give you 1and a half meter leeway, when you don't feel the need to stop at red lights or leave footpaths for pedestrians, or pay any registration or fee to pay for the upkeep of the roads on which you feel completely entitled to ride.

But back to the ad.... well I can't find a link to it, so maybe it has been pulled and if as I suspect it was funded by some government  quango, that will just be more of our tax dollars we will never hear of again. Oh Dear!!
Posted by Unknown at 16:56