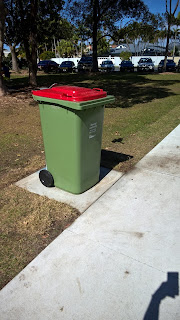 The park next door is well used, by us and Dog and lots of folk with dogs and people who chomp up their fish and chips or their sushi and young lovers and not so young lovers, and youngster hoons with their dinghies,  or families having birthday parties for their kids in public places cos either their yard is too small or they don 't fancy cleaning up the kids' shit everywhere at their place and if they leave a bit of crap in the park, oh well never mind.

By PARK standards I reckon it is pretty small, but by back yard standards, it's pretty big.

There have always been 4 rubbish bins to cater for the usual crap and sometimes the strange shit that passers-by chuck in cos presumably it wouldn't fit into their bins at home, or in the case of christmas prawn shells, maybe they, sometimes us, just don't want the stink to hang around.

There is often a big mess down by the water's edge and civic minded locals like us will do a clean up of bottles and broken glass cos it would hurt the dogs' feet, and maybe not be good for kids either. A few years ago I rang the Council and asked for a bin to be placed down where the weekend mess accumulated, but was told that according to logistics and prorataness and council calculations there were already too many bins there and just because they might not be well placed, it didn't mean that more were needed - I added the last bit.

So we have just cracked on with our own little clean up of our bit of Australia and ho hum to 'em all.

2 weeks ago there was some activity out in the park, the usual council - worker - taking - the - pissness. We all know the routine, dig a little, sit a little, go home early, and a week and a half later there 4 little neat squares of concrete planted next to the useless expensive white elephant of a bike path. So those kids who risked the gravel rash injuries of falling onto the concrete, to play footy in the park, now also have to dodge bins and metal posts. Fucking brilliant!

4 well used bins have been replaced by 6 bins. And I presume that a committee of overpaid council fools agonised for hours over the placement of said new bins, cos all the existing bins have gone and new possies have been found - still none down by the water's edge where the majority of the rubbish is left to float around in the wind. Fucking brilliant!

They are not nearby where people sit and eat their food, but they are on the useless expensive bike path that has so successfully chopped the park in half, so I guess the fellas who wheel the bins over to the rubbish truck are pleased purple, not to have to arduously drag them over the small expanse grass.

Ah maybe the purpose of the fucking path was to make life easy for the bin emptiers. That makes as much sense as all the other lies and excuses I was given for it last year.

Seriously, I reckon these fools could do well swapping with the IBM idiots, cos god knows they all could not do a worse job.