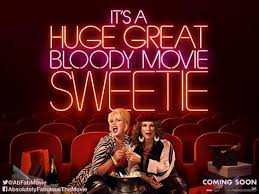 The Ab Fab sit com girls are icons. Everything about the TV show was big and bold and brash and wildly politically incorrect, cos I don't think that was even a thing when they started out. There were so many cringe worthy moments when I used to wonder if they were allowed to do that stuff or say that shit on the tellie. It was daring and excessive and glamorous, and always roll on the floor having a little wee, funny.

A quick google search will tell you that it was made between 1992 and 2012. That's a bloody long time and whilst Eddy's family dynamic changed, the Fab girl's relationship did not.They found themselves in funny, unlikely situations which they managed to wriggle out of in 30 minutes, much to the chagrin of those around them. The dialogue was fast and furious and shocking and ridiculous and very funny. Well that's my opinion anyway. The re-runs were always worth a look and a giggle. In fact I am still happy to watch today, any day.

But the movie was less. Less everything, less funny, though there are a few laugh out loud moments which I am tempted to think were probably improvised on set rather than tightly scripted, and even though the through line was as ridiculous as ever, it was a bit disjointed and sort of jumbled like a bad acid flash back - maybe that's what they were going for? And as for those, 'Did they really say that? moments, well you can forget them. Of course political correctness has limited all manner of possibilities, and so it's not shocking or even surprising, and that's a shame I reckon.

It is cool to play, 'Spot that Famous Person' and that, then is a reason to sit all the way through the credits at the end to see if you were right. The music is cool too, especially if you fancy singing along. But it didn't add to the story line, instead I reckon it was a distraction. It just seemed like an excuse for the girls to give as many of their mates as they could a little walk on role. Or maybe it was like trying to do a whole sitcom season in one movie. You can imagine that if 'Friends' was made into a compilation movie, there would be walk-ins by a huge number of Hollywood stars.

Jennifer Saunders has often said that she wrote the screen play in something of a rush cos she had a bet with Dawn French, who bet Jennifer would never finish it. Perhaps she should have taken more time, or maybe she could have leaned heavily on French's quick wit instead of relying on her as a producer. But now we are getting into far too much detail that may or may not be relevant, a little like some bits of the film.

If you want to go star spotting then you might like the movie, but if you are expecting a movie rather than just a poorly assembled extension of an excellent tellie show, then you might be disappointed.
Posted by Unknown at 17:15