Aussie 'SURVIVOR' - the Jury is still out 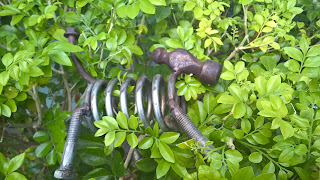 Yeh this isn't a real dog and it's not in a real forest, but it's still a bit interesting.


In 2000, the Reality TV business was a but foetus, I think there was a bit of Big Brother and that was OK and then there was this new show 'Survivor' about a good handful of folk dumped somewhere remote, who had to 'out wit, out play and out last' through physical trials and all manner of psych 101 thinking to be the last man or woman standing. I found it a very intriguing game.

A girlfriend would pop in on 'Survivor' night and we'd have drinks and dinner and discuss the goings on. If she wasn't up for a visit, the discussion would happen over the phone. I thoroughly enjoyed the human 'reality' of it all. I had yet to be bitten by the cynic bug and so believed all that I was seeing, with the gormless gullibility of a naive youngster.

There has been 32 'Survivors' and no, I have not seen them all, I don't think it ever quite made it to the tellie screens in the UK so that is at least 14 of 'em that I missed. It's strange that Jeff yelling out, 'Come on in guys!' was thought to be too, not proper I guess for the poms. But I reckon if it has been playing and I have had access to it, I have watched it.

The new 'Australian Survivor' then was right up on my list of things to watch. But it is a little disappointing. It's just not as slick I guess as the American version, which I suppose aught not be much of a shock given they have had all those years to get things smooth, except that it seems the Aussie version is legally bound to follow the old routine, if not the old dialogue down to the letter, it's all pretty close.

The American version tripped through the 3 day event highlights in 1 hour, less ad breaks, but the Aussie show drags things out for an hour and a half. I am not interested in footage of fish or weird insects, and all the possible dangers and hazards the players are facing, mostly cos I don't believe that any of that is happening anywhere near 'em. I just want to see the guts of it, the challenges and the disasters caused by a storm and the voting off. I just want it to be more savagely edited, yep I want 'em to move it along.

So it's ok, although if the producers had selected some more hard nosed players, who could have spiced things up, that would have been OK with me. Some bitchy bastard acts just wouldn't go astray I reckon. It's on 3 nights a week so I can only guess that channel 10 wanted to get it over and done with, or else they figured it might be a good foil for channel 9's 'The Block'. I cna't begin to pretend to understand the scheduling, except that it is all driven by what advertising can be sold and for how much.

We are recording both these shows and are watching them both on the fast forward, so clearly the advertising is wasted on us. I admit that 'The Block' is getting very quick shift, cos really I only want to see the room reveals, the rest of the drama is too for my bullshit detector.

So I think 'Survivor' is on Sunday Monday Tuesday, and maybe so is 'The Block'. 3 people have been voted off the island so if you fancy having a little look at it, you haven't missed too much, but if you have anything at all else to do like perhaps squeeze a pimple, or decipher your Optus bill ( good luck with that!) then go your hardest, cos I rather doubt your life will be too much the poorer for having missed either of these shows.
Posted by Unknown at 16:13