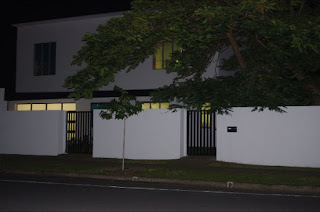 Nearly 3 weeks on the road and seriously I need to have a bit of a feet up afternoon. Yeh it's pathetic I know. But a little Nanna Nap is in order and if it lasted all afternoon I wouldn't be too terribly sad.

No time for resting yesterday as it was straight into my car and off to Brisvegas to see the 'kids'. Seems like every week I don't see him, the grandie boy grows a good few inches. Shit, 3 weeks ago, his shoes fitted him and so did his pants and shirts and now for the first time he has grown out of a pair of shoes before they have shit themselves over boys' stuff like handball and chucking the old body around on the concrete. Yep he has a pretty decent pair of black leather snearkery school shoes circa $130, going begging, except that in typical boy / adolescent / man fashion they are more than a little whiffy and I rather think that new laces could be in order.

So shoes and clothes are the order of the day. I wonder if mothers of all year 6 boys are trying to eeek out the usefulness of the school shirts until the end of the year so that the expense of uniforms can be left until high school.

Washing is almost all sorted here in the Big House. It is amazing how stuff that fits neatly into 2 not very big cases can explode to Himalayan proportions just by undoing the zipper. The old machine that saves me from slapping shit on a rock has been working overtime and might well also be in need of an NN ( Nanna nap)

One thing that I really missed while away, was .... wait for it..... green vegetables.

Yeh we had salad, but I don't reckon lettuce is a vegetable... How can it be if it's true that it uses up more calories to chew it than there is in it? That is sort just like eating air.  And one night I ordered some Broccoli stuff, but when it arrived it looked like shaved stalks and some other stuff that I couldn't identify. The green was overpowered by the white of the stalk innards and I always cut that crap off and bin it, and the other stuff really tasted a bit like shit - well alright my memory of the shit taste is gone if it ever was, so I am only imagining, but I am sure you get the idea. And Steve ordered vegies and got a pile of eggplant - oooooh VERY YUKKY in deed. Steam mixed veg consisted mostly of cauliflower and I only like that with lashings of cheese sauce or pummeled in a soup with bacon and leeks. Veggies have been light on.

So tonight we are having chicken pasta with mushrooms and loaded with leeks and broccoli and peas. It should be green enough to bring cheers from the leprechauns in the garden, and then tomorrow I will have to face the grocery shop for the first time in a month, but needs must and all that. It really could have been done today, but I used Dog as an excuse, saying that it wasn't right to leave her on her own, when we had just got home. Any excuse is a good one if it means a grocery procrastination.

Coming home is always joyful. Sinking into my chair that is Sue-arse molded and sipping on water with scoops of ice that are magically made, not hard fought and loaded into a plastic bag, and showering in plenty of space, and snuggling with Dog, and checking out my garden....yep it sure is good to be home.

What do you miss mostly when you go away?
Posted by Unknown at 16:07