'I am not gonna steal this!'

It's Golf Day so a day all to myself to do whatever I fancy.

The sky is blue and I am not sweating up an ocean and Dog is settled and seems to be of the belief that she is not going to be permanently abandoned so all was well for popping out for a couple of whiles and have a poke around at the local shops.

Firstly I went to the hairdresser wholesalers to see if they had something with which I could paint my hair purple. On holidays, perhaps over a glass or 2 too many, Stevie revealed that he missed the purple hair I had when we first met.... This has played on my mind since. 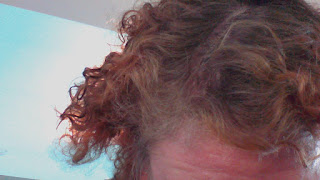 You see I have been growing out what hair is still clinging on and I am bemused and more than a little interested to see what colour is REAL. It has been soo very long - decades in fact, and it is a revelation to see greys and blonde bits and mousy brown stuff, but clearly my inspection is driven by curiousity and Stevie just gets to look at the very slow progress and the shitful re-growth and the faded red brown other bits and the errant left over perm curls. I guess in an honest boozey moment he was letting me know that I have looked better.

But still I didn't want to waste the effort to date in the re-emerging old real stuff, so I wanted to get something that would wash out sort of soonish, but sadly the girls didn't think any such stuff existed, not in purple anyway, so that was a disappointment. I might have been able to colour it all a shit sort of brown, but that just didn't appeal. I am gonna have to go back to Annbrit and see what she can recommend. So that was a fail...Shit!

Then I popped into the kitchen shop. I love having a good look around in this place cos they have all sorts of nick-knacks that may or may not prove useful.

I thought about glasses but didn't like any, and then remembered about  a strainer that I had seen in a designer shop in bright colours. It was sort of square and stood up and was made of silicon I think but it had a big handle. Very useful I thought - but not to be found in this place.

I picked up a couple of oven mits, mostly because they are what I have here at home and I gave Belly some great things I bought in the French shop in Sydney- now closed, but Zig burnt his hand recently getting something out of the oven so I thought these might be safer for him and not useless for Belly either.

So I am carrying them around and then I spied an enamel pizza tray. We have a pizza stone, that is so minging with grease and shit that every time I use it, I wonder if this will be the day we end up with some horrendous disease. So now I am carrying the oven mitts and a pizza tray - not what I would call a terrible burden. 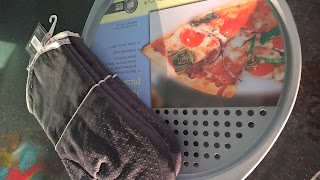 At the back of the store is a sort of anti -room. I just didn't know how ANTI it was . There was no door and no sign saying to fuck off so I was about to step in, when a young bloke in shorts and a faded shirt yelled at me that I was not allowed in there. I was startled. I might have said something about the need for a sign and I possibly mentioned that his seemed like a nazi overkill reaction.

I continued having a poke around while I carried my stuff. The faded shirt kept a close eye on me. He followed me and either he was turned on by an aging bird with bad regrowth, or he was concerned about me nicking shit.

Finally he could stand it no longer and from some distance he called out that I could leave my items at the front desk while I finished looking around.

Well what the very fuck??

I turned to him and said in an equally loud voice, ' I am not gonna steal this you know!'

I finished my browsing and carried my shit up to the front desk where I happily paid for it and left. I don't fancy going back there, but I also didn't want to leave the stuff behind - nose and face and all that.

There was a story this week on the news about a woman who worked at Coles as night filler manager. A couple of young girls had come into the store and were plainly stealing shit. She questioned them they pushed her into a display of stuff and then she grabbed 'em.

For her efforts in trying to prevent store losses, she was fired.

Or maybe he really does have a thing for grannies and I have missed my opportunity to cougar up my Saturday... Maybe.... Bugger!
Posted by Unknown at 16:44