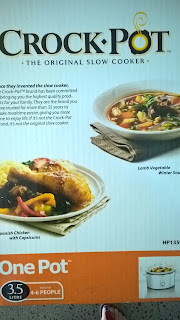 A lifetime ago when I was a baby getting married, I received a Crock Pot as a wedding present. It was a big ugly brown and orange thing perhaps in keeping with the late 70's colour palate. As a girl of 19 I rather thought it looked like something 'old folk' might use.

It stayed in the box for a good long time until I saw the error of my ways and dragged it out and made dinner after dinner in it.

I'd get up and chuck all manner of cheap shit in it. Cheap meats, and cheap seasonal veg and if we were lucky the last squirt from a flagon of red or white wine, the colour was not all that important cos I was not a wine snob, I judged the vino by percentage not taste. So after I shoveled all this into it, I'd turn it on and walk away, off to work or Uni and by the time I got home hours later, there was dinner all set to go and we'd just plunge right on in. It just left time for the more important stuff that newly weds got up to.

We were on a tight budget. I was still at Uni and he was working for a big Telco, well back then, the ONLY telco and so we'd put money aside and go meat shopping at the bulk butcher once every couple of months. You had to buy A LOT of meat from the bulk fellas, but per kilo it was sooo much cheaper.

The Crock Pot was an excellent way of dealing with all those strange cuts of meat left over in the bottom of the freezer after you have picked out all the good bits from the half a cow you bought on sale and stacked into plastic bags and labelled ( who am I kidding, I never labelled anything) and popped into the chest freezer.

I can remember doing the maths, per meal to make sure the cow came in under budget. It was always cool to see how the expense of the T-Bones or the filet steak could be offset against tail or toenails or other strange parts, but then you had to get creative about how to cook these weird frozen baggies.

Once the Crock Pot had been unveiled and worked out, those off cuts were no longer a problem.

Anyway my old Crock Pot went the way of my marriage and I haven't really given it much of a thought since, except last week when I was at Bell's I remembered it and started telling her of all the possibilities. She might enjoy cooking more than I do, but she still doesn't want to spend too much time agonising over what to dish up for the 2 of them. I suggested a Crock Pot idea and she jumped at it.

Turns out we had both been wondering about a pressure cooker, but are too scaredy-cat to try one. I see all those pictures of people who have burnt themselves on flash cooking equipment and figure that could easily be me, and the idea that a pressure cooker could just explode really scares the shit out of me, so they are a no go for me, or so it seems for Bell.

Anyway while Stevie and I were out and about we stumbled across....wait for it...a Crock Pot. Now there are slow cookers and temperature controlled frying pans and of course ceramic things that go in the oven, but when I saw the actual CROCK POT name, I thought it must be a sign from the cooking fairies and we snaveled one up for Bell, maybe we should have got 2.

So now I am gonna deliver it up to her on Tuesday and to make it really useful, I should probably take the makings for a dinner, stuff that is cheap and cheerful but that might after slow hours in the Crock, be tasty and delicious.

Oh shit, I am starting to sound like a Masterchef judge.

As the weather seems to have finally turned, it's the right sort of dinner for dark cold nights.

I hope she gets as much use out of it as I did my old ugly one.

And as another nod to the old fashioned, I am gonna try making a meat loaf tonight. Fingers crossed.